Paget’s disease of the breast is an uncommon type of cancer of nipple-areola complex and it is frequently associated with an underlying in situ or invasive carcinoma. If there is persistent eczematous involvement of the nipple, which does not respond to the local treatment, then suspicion for Paget’s disease must be considered. It constitutes 1-4.3% all breast cancer cases and is frequently associated with an underlying malignancy. Paget’s disease of the nipple is a rare disease that requires high suspicion and a good knowledge of symptomatology for quick diagnosis. The present study is based on four cases of Paget’s disease which were evaluated further to identify the underlying cause.

Paget’s disease represents 1-3% of female breast cancers.1 It appears as an isolated disease in 1.4-13% of cases and is associated with an in situ or invasive glandular carcinoma in 90-100% of cases.1In situ histology is found in 33% of cases. It occurs commonly in postmenopausal women, often during the late decades of life (mean age 57 years), but it has been observed in adolescents and in elderly patients too.2 Paget’s disease is mostly associated with ductal carcinoma in situ (DCIS), restricted to the nipple-areola complex of the breast.

This study presents four patients of Paget’s diseases with different manifestations of the disease and their associations.

CASE 1: A 23-year-old female with no significant family history of cancer, noticed an ulcer on the nipple-areola complex of the right breast. The examination revealed an eczematous lesion of the right nipple with pale yellow discharge. On palpation a firm lump was found in the right breast in the central retro areolar part. On ultrasonography an ill-defined heterogeneous predominantly hypoechoic lesion of 18x10 mm, with few foci of microcalcifications is seen at 1-2’o clock position of the right breast (Fig. 1A).

Figs 1A and B: (A) On ultrasonography an ill-defined heterogeneous predominantly hypoechoic lesion of 18×10 mm, with few foci of microcalcifications is seen at 1-2’o clock position of right breast. (B) H and E,400× shows nipple areola with presence of malignant cells in the epidermis favoring Paget’s disease. Dermis was unremarkable

Grossly nipple-areola showed an ulcer. On cutting, a grey-white hard tumor was identified measuring 6 × 5 × 2 cm in the central part. Distance from overlying skin was 2 cm and from nipple-areola was 3.2 cm.

Microscopically tumor was reported as infiltrating ductal carcinoma, moderately differentiated. Nipple-areola showed the presence of malignant cells in the epidermis favoring Paget’s disease. The dermis was unremarkable (Fig. 1B). Five out of nine lymph nodes showed the presence of metastatic carcinoma. Tumor was immunonegative for ER/PR but positive for Her2neu (score 3).

Then MRM was done and sent to the surgical pathology department. On gross examination, nipple-areola appeared slightly ulcerated and on the cut section, a grey-white growth was identified in the retroareolar part (Fig. 2A). 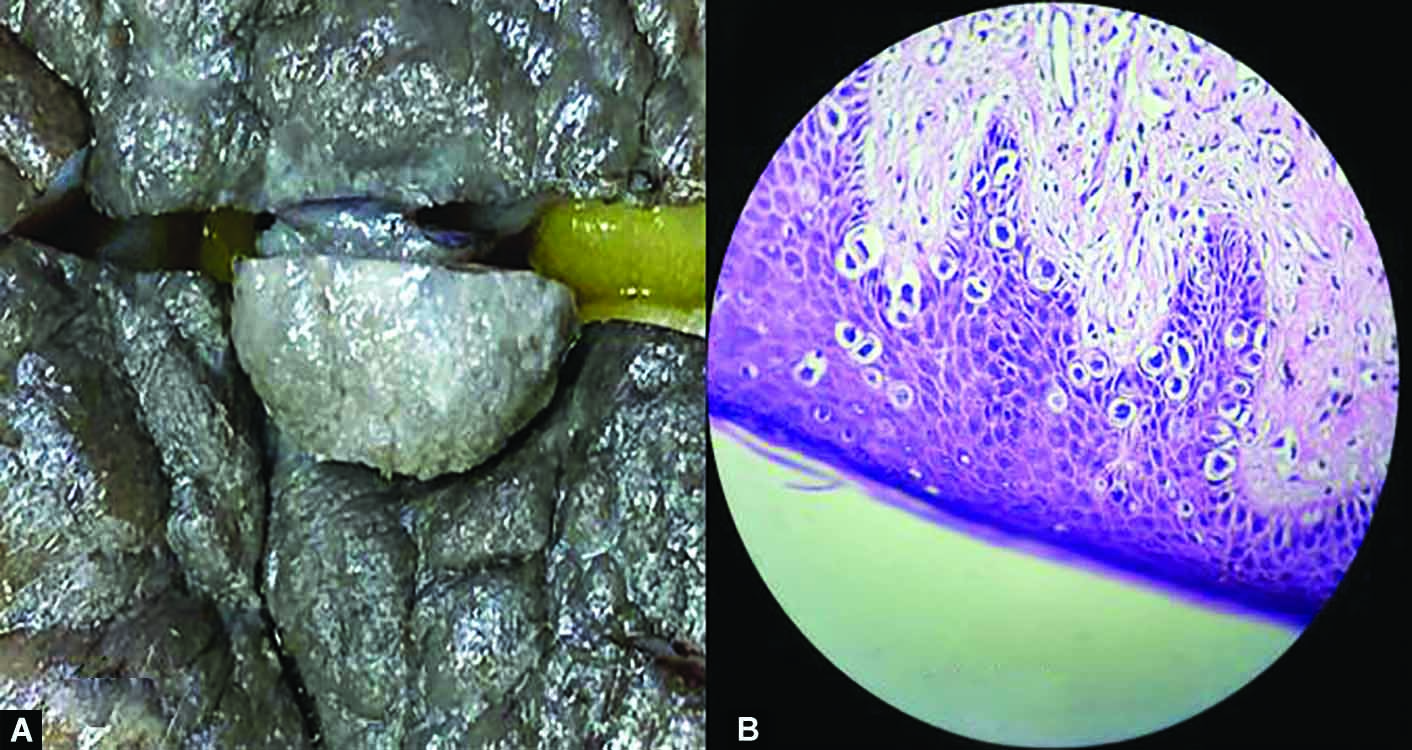 Figs 2A and B: (A) Gross examination showing lesion on nipple-areola complex. (B) H-E,400× shows nipple areola showing Paget’s disease

Tumor was immunonegative for PR but immunopositive for ER and Her2neu (score 2+ equivocal).

CASE 3: A 33-year-old female presented with a complaint of ulceration on nipple-areola complex of the right breast. On clinical and radiological examination, a large lump was identified just beneath the nipple-areola complex. Trucut biopsy revealed infiltrating ductal carcinoma, NOS.

Microscopically, it showed infiltrating ductal carcinoma, moderately differentiated. Tumor was reaching up to dermis with a focus of pagetoid spread of tumor cells in the overlying epidermis (Fig. 3). No lymph node metastasis was seen. 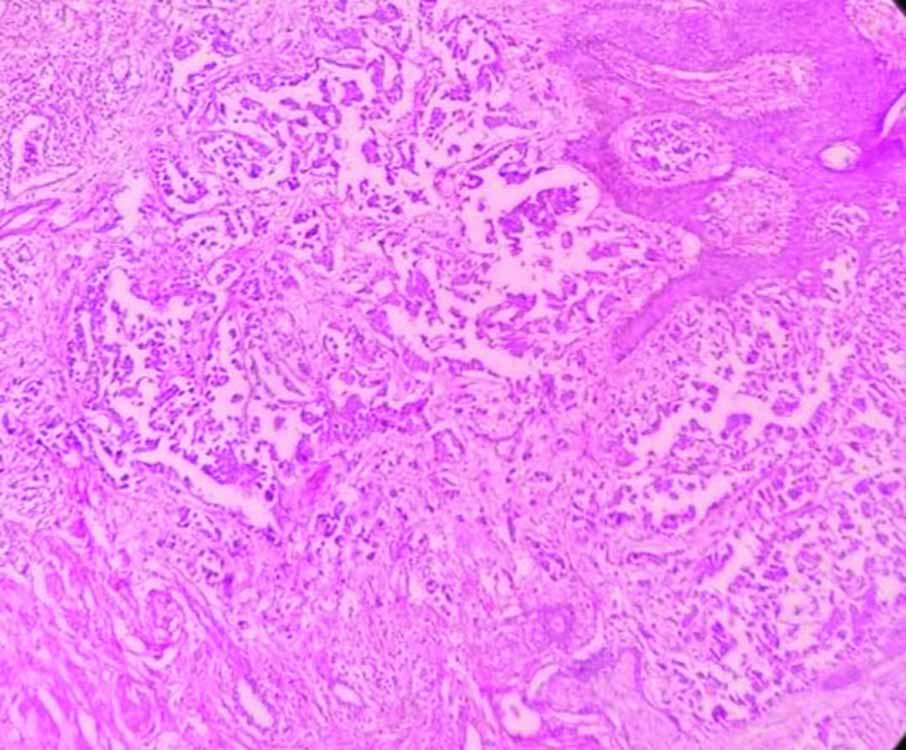 Fig. 3: H and E,400× shows infiltrating ductal carcinoma, moderately differentiated. Tumor was reaching up to dermis with a focus of pagetoid spread of tumor cells in the overlying epidermis

Tumor was immunonegative for ER/PR but positive for Her2neu (score 3).

CASE 4: A 65-year-old female presented in surgical OPD, with a lump in left breast for 4 months and pain in left breast for 10 days, not associated with discharge. Mammography showed the clusters of microcalcifications in the left breast. The findings on ultrasound included heterogeneous hypoechoic areas in breast parenchyma along with the presence of discrete mass and dilated ducts.

Grossly MRM specimen was received; nipple-areola was not identified and appeared to be eaten up. A large tumor was identified along with large lymph nodes in axilla. 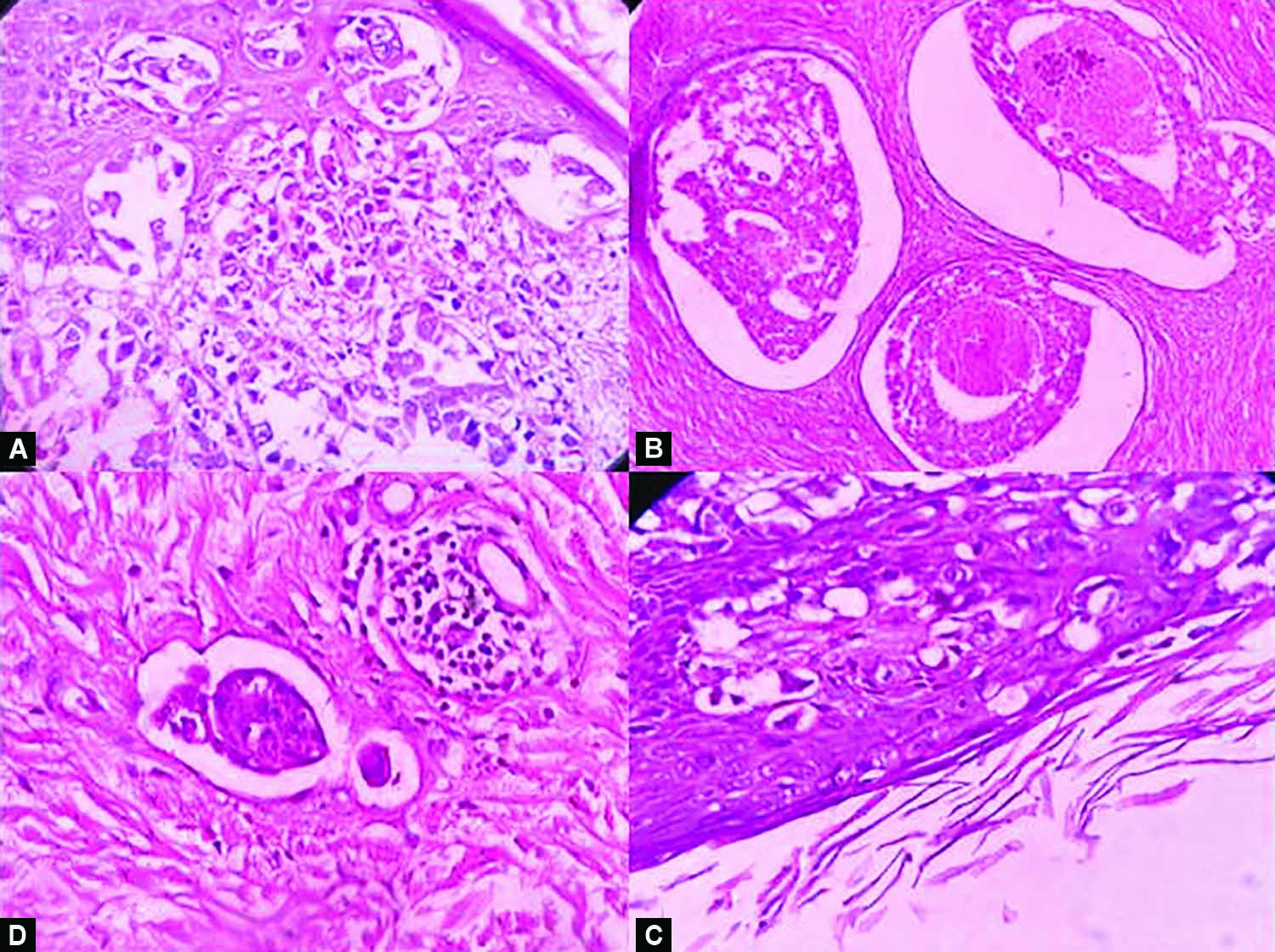 Paget’s cells are the characteristic histopathologic feature of Paget’s disease.4 These cells form clusters in the basal layer of the epidermis and are similarly distributed like that of junctional melanocytes. Paget’s disease has a characteristic presence of neoplastic cells in various layers of the epidermis in a similar pattern to that observed in melanoma2 (and termed pagetoid spread). It is difficult to distinguish melanoma from Paget’s disease, especially when there is the presence of melanin pigment in carcinoma cells.2

An eczematous lesion on the nipple is a hallmark of presentation. It may respond up to a certain extent to antifungal therapy and this contributes to late presentation and misdiagnosis.5 Patient may present with a palpable mass, but it is less likely to be seen in patients with an early presentation.

Risk factors for Paget’s disease of the breast are similar factors that affect the risk of developing any other type of breast carcinoma such as age, personal history or family history of breast cancer, inherited gene mutation, women with dense breast tissue, radiation exposure, excess weight, hormone replacement (estrogen) after menopause.6

Prompt diagnosis of this disorder is required to initiate appropriate investigations (skin biopsy) to differentiate it from other benign inflammatory dermatoses and to detect underlying breast carcinoma.

Carcinoma in situ of skin /Bowen disease in which individual cells show keratinization and multinucleation. These cells are positive for CK5 / 6 and are negative for CK7, CEA, HER2.2

Other important differential includes melanoma in situ ; these cells are positive for Melan A, HMB45 and are negative for CK7.2

Toker cells and pagetoid dyskeratosis also mimic Paget’s disease but these cells are bland and are Her2 neu negative.2

Treatment depends on the underlying cause and carcinoma type.9

Paget’s disease is an intraepidermal adenocarcinoma that is difficult to diagnose clinically as it mimics inflammatory or infectious diseases. As a consequence, it may be clinically misdiagnosed resulting in a delay in appropriate management. Paget’s disease of the nipple is a rare disease that requires high suspicion and a good knowledge of symptomatology for quick diagnosis.2