Introduction: Adrenal myelolipoma is a benign neoplasm composed of mature adipose tissue and scattered islands of hematopoietic elements. Although the true incidence of these tumors is unknown, the incidence estimated to be is quite less. These lesions are usually unilateral and asymptomatic and are very rarely found as bilateral tumors.

Aims and objectives: To present a rare case of “Symptomatic Bilateral Adrenal Myelolipoma”.

Materials and methods: A 53-year-old woman presented with complaints of pain abdomen for 6 months. Physical examination was unremarkable. Computed tomography (CT) scan of the abdomen revealed a well-defined, round lesion bilaterally with heterogeneous attenuation suggesting the possibility of myelolipoma. The patient was subjected to bilateral adrenalectomy and the bilateral adrenal masses were sent for histopathological examination.

Results: The histopathological evaluation of masses confirmed the diagnosis of bilateral adrenal myelolipoma.

Conclusion: Although mostly discovered as an “incidentaloma”, the diagnosis of adrenal myelolipoma warrants through diagnostic study. Surgical resection is the mainstay as it prevents complications, such as spontaneous rupture and hemorrhage of the mass.

Myelolipoma is a rare, non-functional, benign neoplasm that predominantly occurs in the adrenal cortex. In 1905, Gierke first described the occurrence of a mass lesion in the adrenal glands composed of mature fat and mixed myeloid and erythroid cells.1 It is the second most common tumor of the adrenal cortex, the first being adenoma.2 It comes under the category of mesenchymal and stromal tumors of the adrenal gland. It is composed of mature adipocytes and normal hematopoietic tissue. Although they do not represent a hematopoietic source, they contain hematopoietic elements consisting of myeloid and erythroid precursors as well as megakaryocytes. The incidence is unknown, it is estimated to be 0.08–0.25% accounting for 2.6% of all primary adrenal tumors.2–4 Earlier it was more commonly seen in subjects during an autopsy; however, recently myelolipomas are being increasingly detected in living patients by imaging techniques. They are often seen in patients in their fifth to seventh decade of life and show female predominance. Myelolipoma is twice as common on the right side as on the left. They are usually unilateral and asymptomatic and are rarely found bilaterally.5 Around 40 bilateral cases have been reported in the literature.2

A 53-year-old woman presented to surgery OPD with complaints of pain in the abdomen for 6 months. Physical examination was unremarkable. Computed tomography (CT) scan revealed a well-defined, round lesion bilaterally with heterogeneous attenuation, size being larger at the left side. Hematological investigations including hemogram, cortisol levels, biochemical parameters, liver function tests, renal function tests, and electrolytes (Na, K, Cl) were within normal limits. The patient underwent bilateral adrenalectomy and the masses were sent for histopathological examination.

Microscopically, normal adrenal tissue was seen at the periphery along with adipocytes with interspersed hematopoietic elements comprising of myeloid and erythroid precursors as well as megakaryocytes. Features were consistent with myelolipoma (Figs 2 to 4). 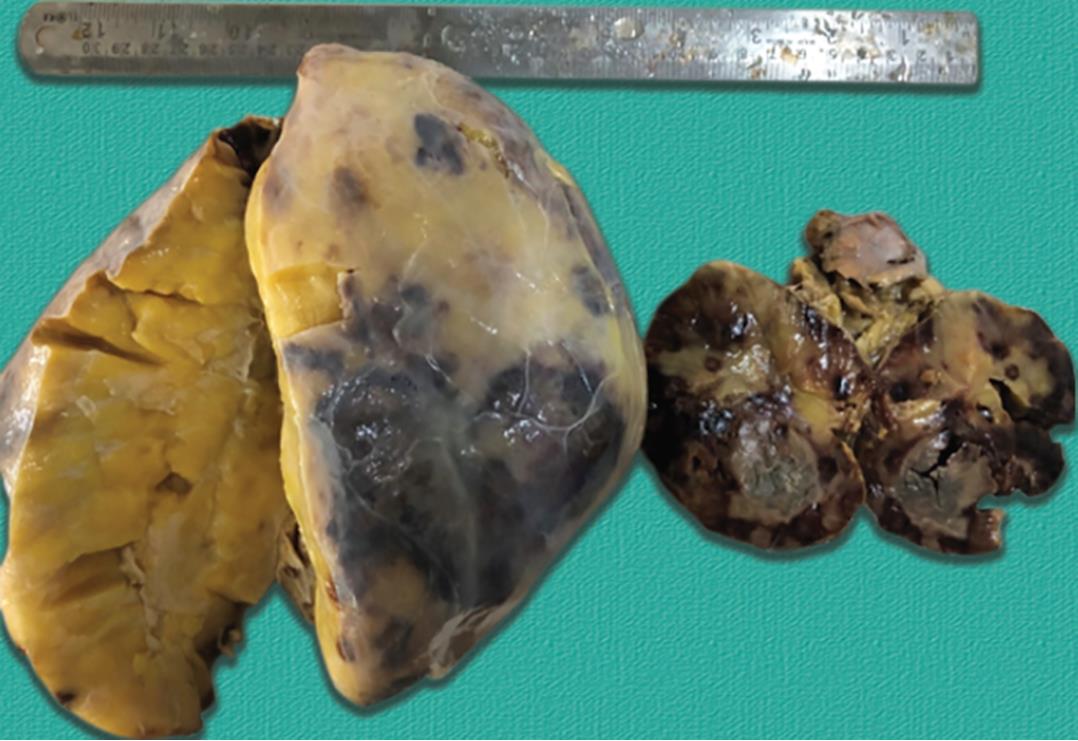 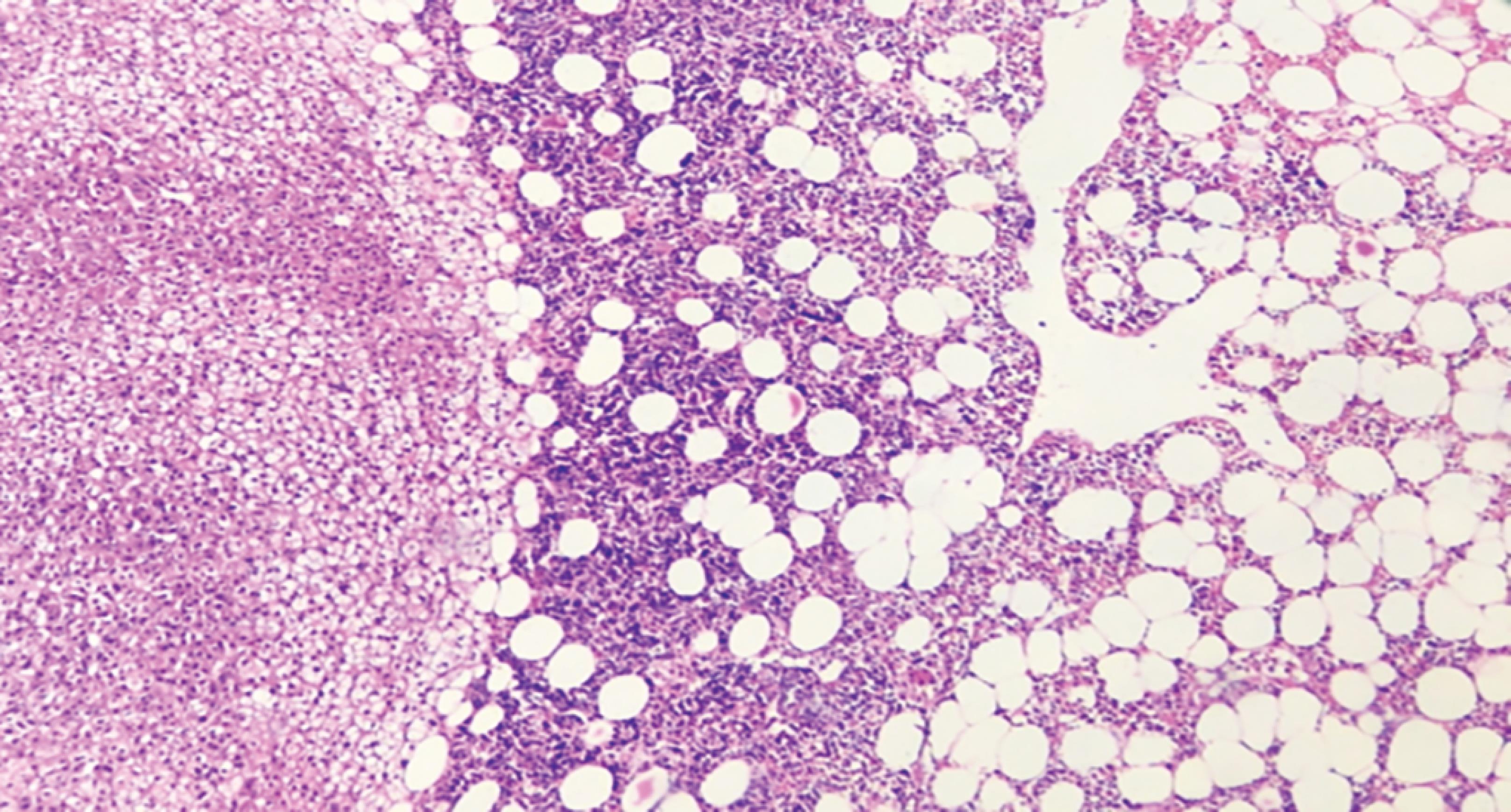 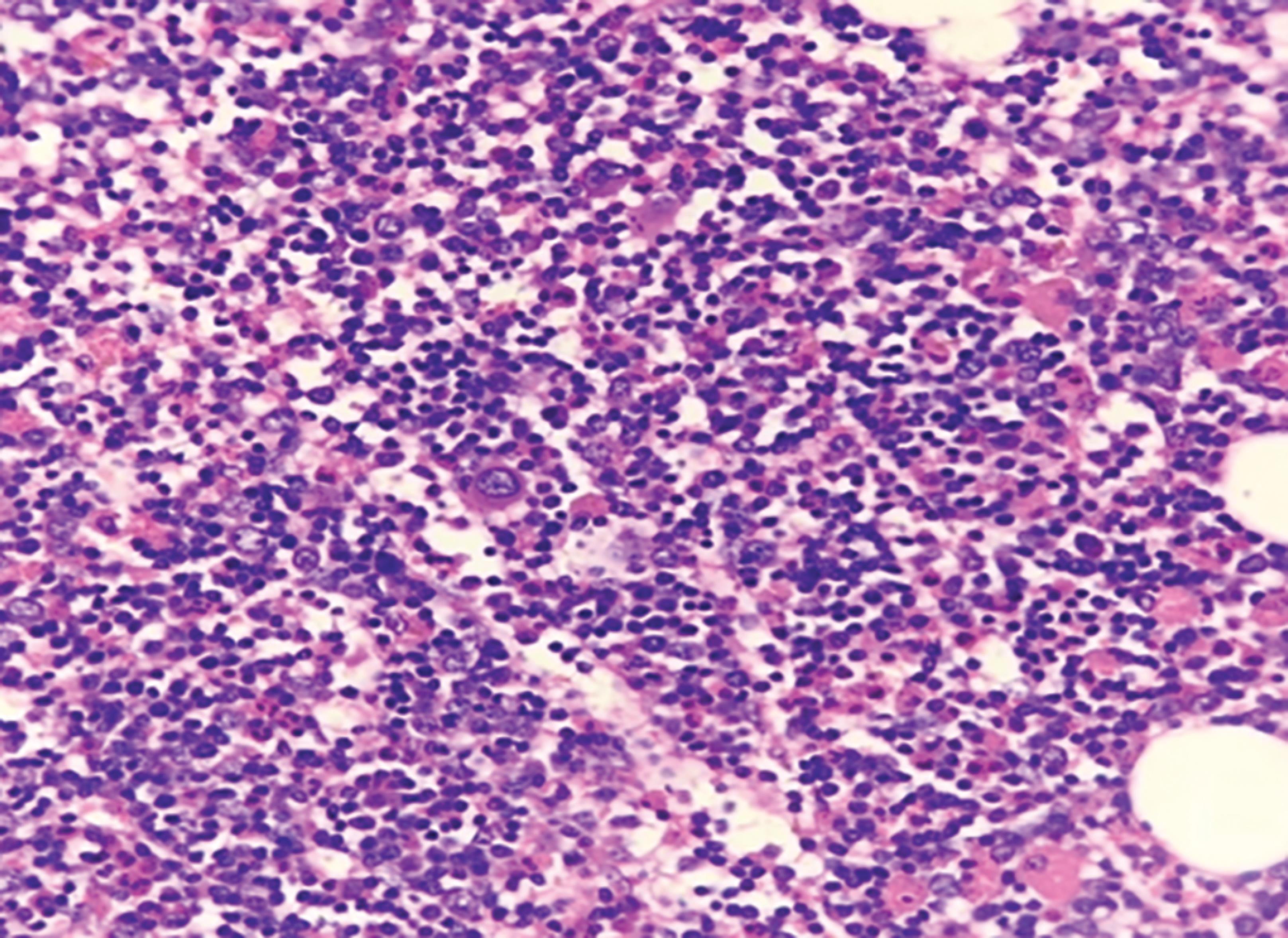 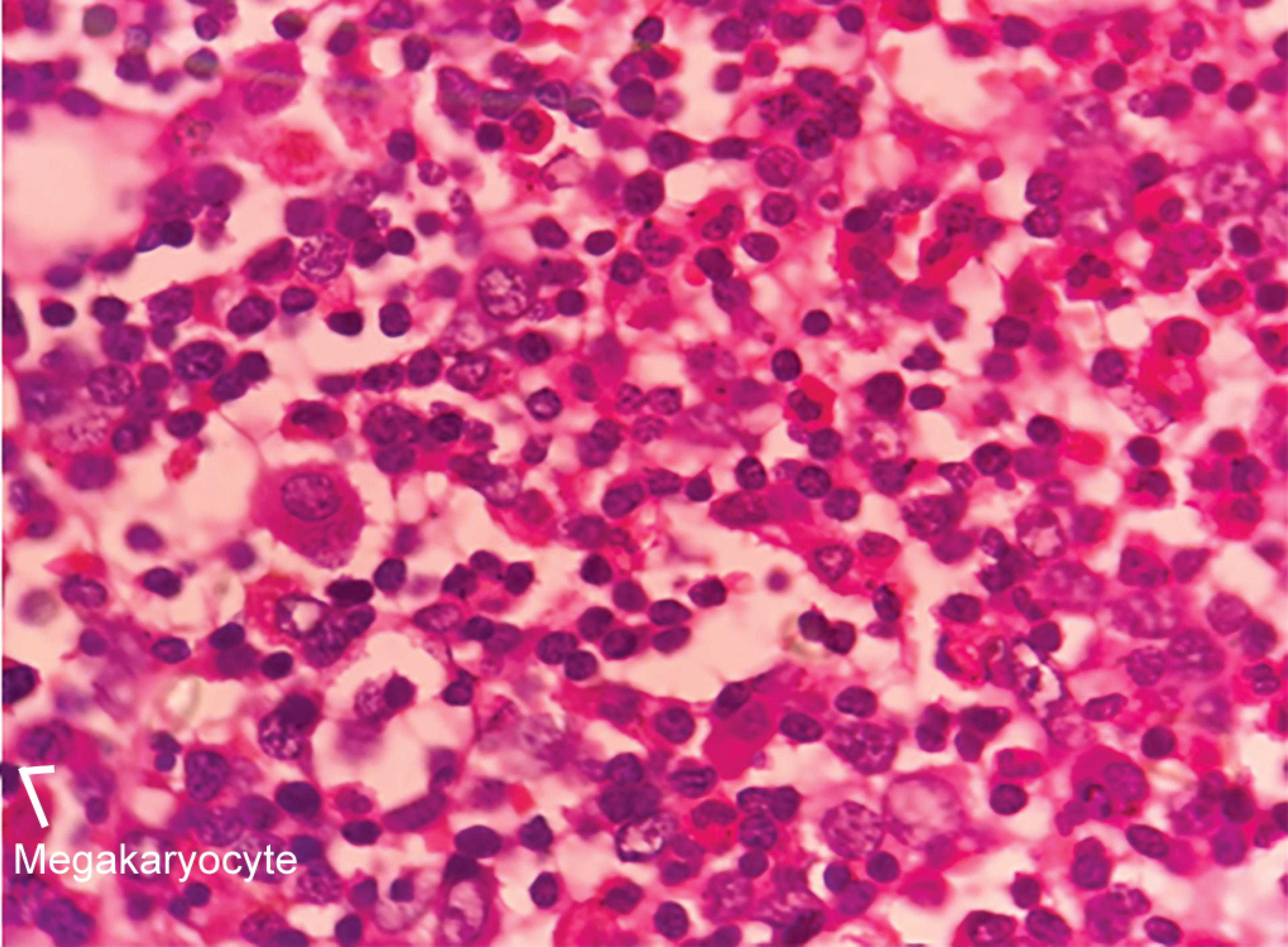 The conditions often associated with adrenal myelolipomas include Cushing’s disease, obesity, hypertension, and diabetes which are considered as major adrenal stimuli.12 Other contemporary authors have speculated about a stressful lifestyle and an unbalanced diet as factors that may be involved in the pathogenesis of this tumor.13

Ultrasonography, CT, and magnetic resonance imaging (MRI) are all effective in diagnosing most of the adrenal myelolipoma based on the identification of fat, with CT scan considered as the most sensitive.14,15 Since the occasional of these tumors are functional, an endocrinological evaluation may not be useful. The differential diagnosis should include renal angiomyolipoma, retroperitoneal lipoma, and liposarcoma.

Adrenal myelolipomas are rare tumors, mostly of benign nature, and clinically silent. However, their “incidental” findings should warrant careful diagnostic study so that appropriate management can be planned. Imaging modalities, such as, ultrasonography and CT, can yield the diagnosis. There is an increasing number of myelolipomas reported which necessitate the use of thorough workup including biochemical studies. Surgical resection is the mainstay as it minimizes postoperative complications and leads to a quicker recovery.