Root canal treatment, or endodontic treatment, is a procedure frequently done to debride, disinfect, and remove residual microorganisms found in infected root canals of teeth. Certain chemicals have been found to be effective in disinfecting the root canal system with different success rates. Sodium hypochlorite (NaOCl) is a common irrigation solution and disinfectant used in root canal treatment. It has strong antibacterial and tissue-dissolving properties. Although it is a potential irrigant, but severe complications can occur when it comes into contact with soft tissue especially due to its cytotoxic features, some of which are life-threatening. This case report documents successful management after accidental extrusion of NaOCl into the periapical area and explains precautionary management protocols for such cases.

The motive behind a successful root canal treatment relies on a thorough debridement of tissue remnants, bacteria, and toxins from the root canal system. For a proper disinfectant canal, mechanical preparations alone are not enough. The morphological framework of the canals makes it difficult for a complete debridement of root canals, as remaining pulp tissue and bacteria may persist in the irregularities of the canal. Therefore, irrigants should support and complement endodontic preparations by flushing out dentinal debris, dissolving organic tissues, disinfecting the canal and providing lubrication during instrumentation without causing any harm to the surrounding tissues.1

Sodium hypochlorite (NaOCl) is a common chemical disinfectant and irrigant used as a partner to mechanical debridement. It was used as a wound irrigant in 1915 and became the most accepted irrigation solution in endodontics. It was also used to clean contaminated wounds during World War I.2

Sodium hypochlorite is the most efficient, inexpensive, readily available chemical. It is considered to be the most favorable irrigant for use throughout instrumentation because it possesses potent antimicrobial and proteolytic activity. It is used to remove the debris and dental chips that forms on instrumented dentin surfaces. Also, it acts as a lubricant. With a pH of 11–13, it causes injury principally by the oxidation of proteins, and it can dissolve necrotic and vital pulp tissue, killing a broad range of pathogens.3

The proper concentration of NaOCl remains debatable. However, the effective concentration ranges from 2.6 to 5.25%, although it has been proven that a concentration over 0.5% is cytotoxic. At immense concentrations, NaOCl causes ulceration, inhibition of neutrophil migration, damage to endothelial and fibroblast cells, facial nerve weakness, hemolysis, and necrosis after extrusion during endodontic treatment.1

Vascular permeability is also damaged by NaOCl due to either direct damage to blood vessels or by chemical mediator release. As a result, interstitial hemorrhage is generally seen causing spontaneous swelling and bleeding.1

A 72-year-old female patient came to the Department of Conservative Dentistry and Endodontics, complaining of pain in upper right back tooth region since 5 days. Intraoral examination revealed maxillary second premolar with attrition, and it was tender on percussion. Radiographically, tooth showed wedge-shaped defect of crown with widening of lamina dura. Provisional diagnosis of acute irreversible pulpitis with apical periodontitis was made.

While irrigating the canal for final time using NaOCl, patient complain of sudden severe pain and distress. Immediately, she had a tense, shiny, and warm swelling extending from right lower eyelid to corner of mouth and from ala of nose to angle of mandible. Bleeding was present from the canal. Immediately, NaOCl accident was suspected. Canal was copiously irrigated with saline. To control swelling and pain, cold compress was used for 24 hours. Patient was reassured about accident and for further treatment. Patient was treated with amoxicillin clavulanic acid 625 mg TDS, chymoral forte BD, Pan-D OD (orally) for 7 days, and dexamethasone sodium phosphate injection (4 mg/mL), and diclofenac sodium (75 mg/3 mL) was given intramuscularly for immediate pain relief. Patient was advised cold compress for next 24 hours (Fig. 1) and was recalled after 24 hours. 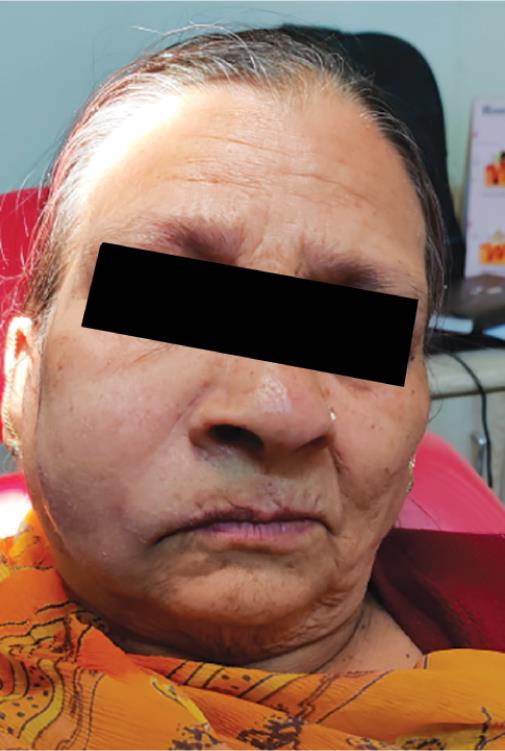 Fig. 1: At the time of sodium hypochlorite accident 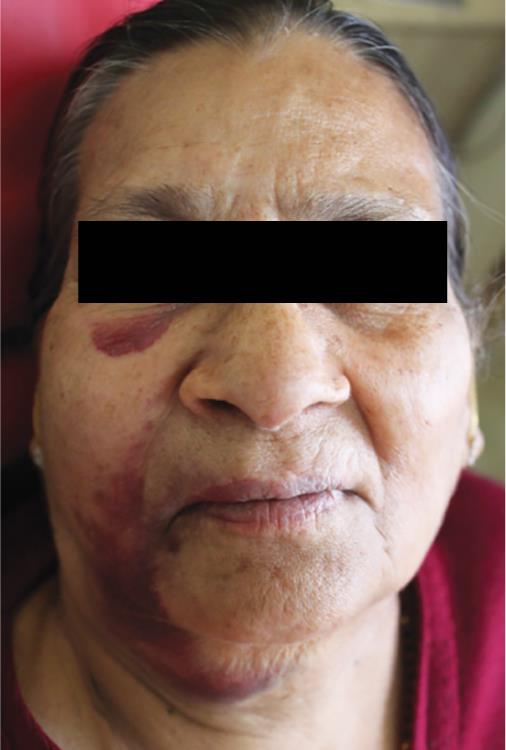 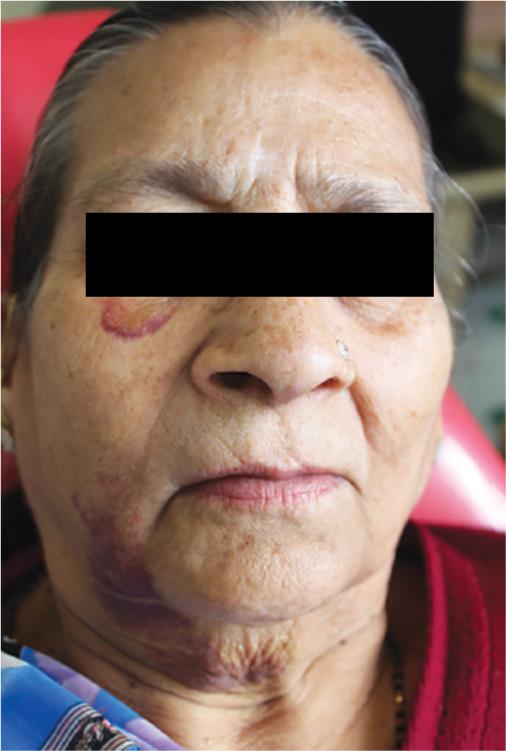 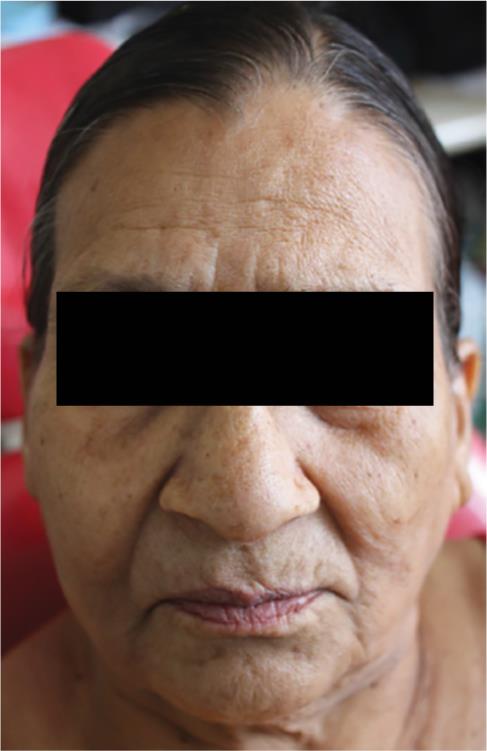 After 24 hours, redness, edema, or swelling and ecchymosis in the gingival tissue surrounding the tooth along with the external face involving infraorbital region and upper lip mucosa was evident (Fig. 2). Patient was advised to do warm mouth rinses for 7–10 times in a day for at least 15 days.

On the 7th day, pain and ecchymosis was reduced (Fig. 3), and by the 15th day, no bleeding, pain, or ecchymosis was observed (Fig. 4). On the 20th day, root canal was obturated, and patient was kept on follow-up.

In spite of different methods taken by the clinician, NaOCl accidents may happen resulting in catastrophic complications. In most of the NaOCl accidents, treatment is palliative and should be initiated immediately as soon as the first sign appears.4

Sodium hypochlorite accidents are the most commonly caused by loss of working length active irrigation, open apex, fractured root, perforation, presence of lateral canals and fenestration may contribute to extrusion of NaOCl into periradicular area. Sodium hypochlorite accidents mostly occur in buccal and infraorbital region as the apex of teeth lying in these areas may sometimes fenestrate the overlying alveolar bone naturally.5

Sodium hypochlorite accidents occur more commonly in maxilla than mandible because the roots of maxillary teeth are in close proximity to the labial bone surface. Females are more frequently affected than males because of thin and less denser bone. It is more common in upper premolars. The incidence of NaOCl accident is more commonly seen in teeth with periradicular lesion because of bone resorption that results in fenestration of the overlying bone.4

A NaOCl accident can be prevented if the irrigating device used is at least 2 mm short of the working length during irrigation. Delivery of irrigating solution passively with low pressure not only prevents extrusion of NaOCl but also prevents apical extrusion of debris from the root canal. It was observed that binding of syringe within the canal deliver the irrigating solution actively. Use of side-vented needle lowers the risk of accidental extrusion of irrigant into the periapical tissues through the apical foramen.5

Management of NaOCl accident depends upon the degree of tissue damage and type of tissue involved. During management, NaOCl solution should be interrupted from spreading further into the tissue, thus reducing the tissue damage.6

During initial 24 hours, cold compressions may be helpful in controlling the swelling with immediate irrigation of root canal or damaged soft tissue with normal saline to dilute the NaOCl. After 24 hours, hot packs may be beneficial in increasing circulation. Analgesic and oral antibiotics should be taken immediately and continued for 7 days to reduce secondary infection. Antibiotics can be further modified according to patient’s current condition. Patient is advised for steroid therapy for 2–3 days to control inflammatory reaction. The patient should be kept under observation. Root canal treatment(s) can be deferred until the symptoms subside.2

Sodium hypochlorite is important in endodontic treatment as a disinfecting irrigation fluid. Accidents can occur with NaOCl use but are rare. Consequently, the minimal way to avoid such accidents is to adopt the above-mentioned preventions. If an accident happens, this protocol comprising immediate intervention with patient follow-up will allow reversal of unfavorable reactions and successful resolution of therapy.5