A Rare Case of Arteriovenous Malformation of Mandible: A Case Report

Arteriovenous malformation (AVM) is a congenital disorder of the veins and arteries that makeup the vascular system. This report presents a case of AVM in the body and ramus region of left side of mandible in a 22-year-old male. The case presents with diffuse swelling present on left region of the body and ramus area of mandible since 8 months. Malformation was diagnosed with the help of detailed patient history, clinical evaluation, radiographs, and computed tomography (CT) scans. The definitive diagnosis was made by CT angiography. Later hemimandibulectomy with simultaneous reconstruction by a titanium plate was done.

An abnormal connection between arteries and veins is termed as arteriovenous malformation and is usually present at birth. Vascular anomalies can be further subdivided into vascular hemangiomas, arteriovenous, capillary, and lymphatic malformations. Arteriovenous malformations (AVMs) are usually congenital, and there are known genetic mutations that can lead to an increased occurrence throughout the body. Symptoms of AVM vary according to the location of the malformation. Roughly 88% are asymptomatic, and surgical treatment is necessary in symptomatic AVMs. Current treatment of AVM mandible involves surgical resection of mandible in conjunction with embolization to help control hemorrhage. The recommended treatment is radical resection of the affected part of the jaw. Vascular anomalies often affect the soft tissues of maxillofacial region because of their ability to cause significant hemorrhage, and intraosseous venous anomalies can be life-threatening entities. Spontaneous hemorrhage is reported to cause 25 deaths.1–4

A 22-year-old male presents with diffuse swelling, since 8 months, extending anteriorly from the left corner of the mouth to posteriorly 2 mm anterior to left tragus. Superiorly, the swelling extends from upper molar region to 1 cm below lower border of mandible. There was marked facial Asymmetry with fullness over left side of the face. The lesion was asymptomatic and nonpulsatile. On intraoral examination, the whole dentition was intact with all sets of permanent teeth, there was obliteration of gingiva buccal complex of left posterior mandibular area (Fig. 1).

Fine-needle aspiration cytology (FNAC) was done with 22-bore needle, and it revealed fresh blood on aspiration which believed that the lesion might be AVM. CT angiography was done and highlighted AVM of the left mandible (Fig. 3).

Following all hematological examinations, the patient was planned for surgery under general anesthesia. Extended submandibular incision was given. Selective dissection was done from medial to lateral side to approach the lesion. Facial artery, masseteric artery, inferior alveolar artery, and mental artery ligation was done prior to resection, and medial pterygoid muscle was dissected and stripped. Mandible was resected from distal to the lower canine on left side till the condyle. Hemorrhage was controlled by using electrocautery and bone wax. Reconstruction of the jaw was done with a titanium reconstruction plate with condylar head preadapted on stereolithographic model using 3D CT scan. Gross appearance of mass was smooth, nodular, capsulated which measured 7.5 × 7.5 × 4 cm. Histopathological section confirmed it as an AVM (Figs 4 to 7).

Figs 1A and B: Preoperative picture

Figs 2A to C: An orthopantomograph and three-dimensional reconstruction scans showing the lesion

Arteriovenous malformation of the mandible is a rare entity but has significant potential for mortality due to massive hemorrhage. These vascular anomalies are widely known because of its occurrence in the central venous system but can appear in any location. They can cause intense pain, swelling, and bleeding which leads to serious medical problems. AVMs appear radiographically like other lesions in the bone, and most radiolucent lesions should be aspirated before biopsy is performed to prevent major complications.5 On aspiration, we obtain bright red blood in syringe if AVM is suspected.6 CT angiography is confirmatory diagnosis for AVM. Surgery is the most common treatment for AVM. In some cases, a catheter or radiation may be used to close off blood vessels. Medications may be used to treat particular symptoms if present. In some cases, ligation of external carotid artery is done where bleeding cannot be controlled. To diagnose the AVM, we need to look for symptoms and perform a physical examination to listen for sounds caused by varied rapid flow of blood through the arteries and veins of an AVM.7 Cryosurgery, radiation, and sclerosing agents have also been used as treatment for AVM.8 Surgery along with vessel embolization has been indicated as a definitive treatment (Table 1).9 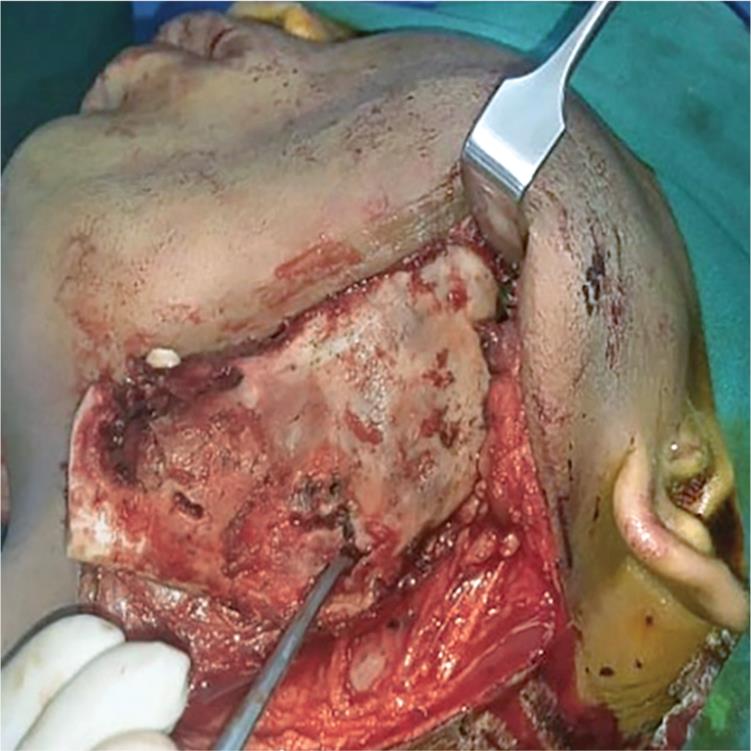 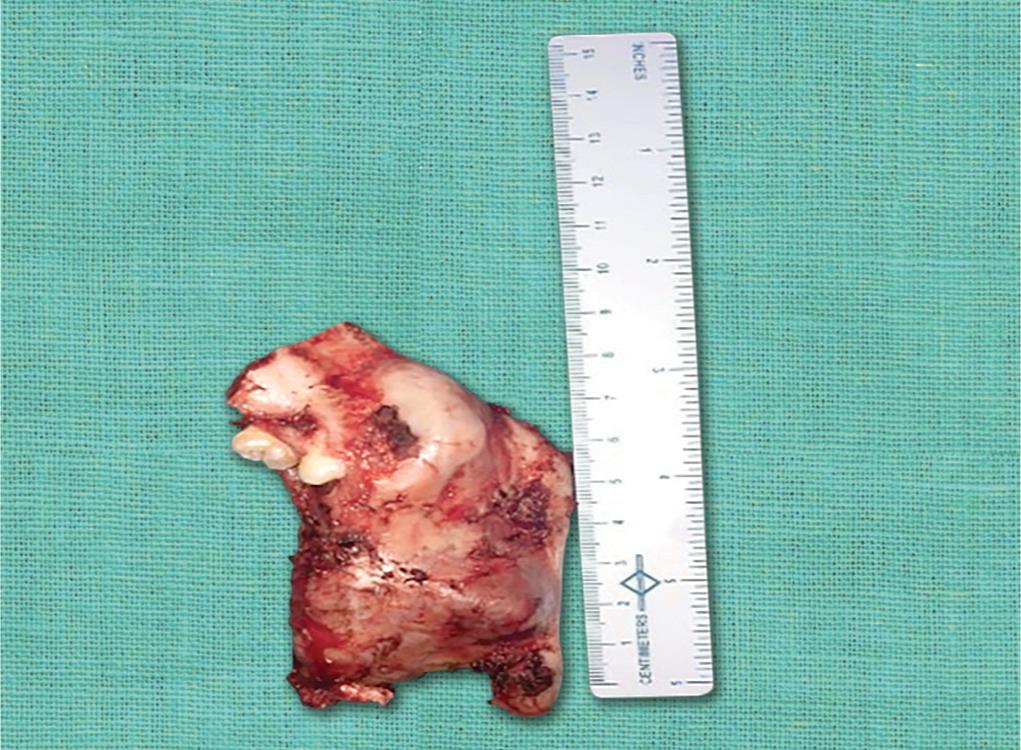 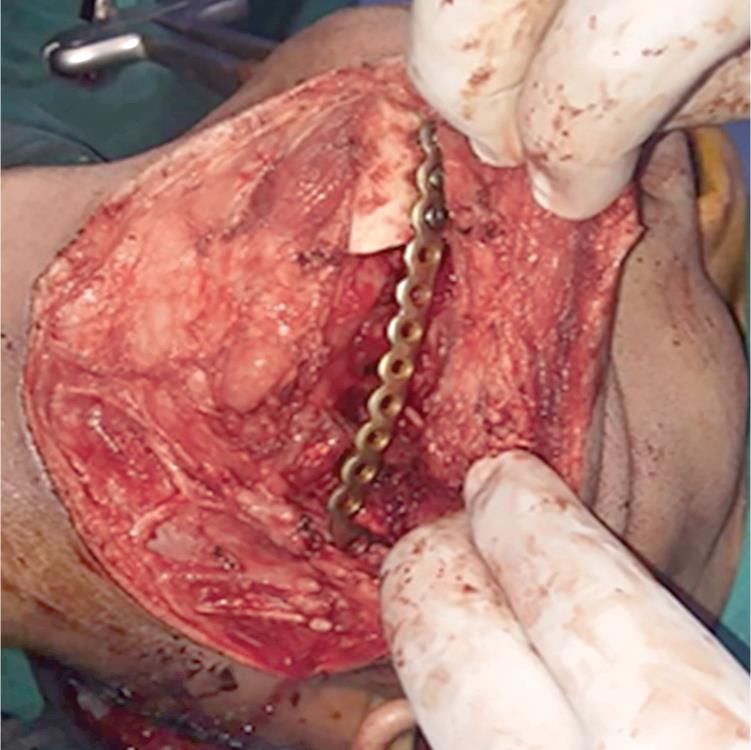 Figs 7A to C: (A and B) Postoperative pictures; (C) X-ray of the paranasal sinus

Arteriovenous malformations present as an asymptomatic swelling that gradually increases over time. Due to its asymptomatic nature, a careful approach toward a definite diagnosis should be made by excluding other lesions. Microscopic examination along with CT angiography is the gold standard for making a definite diagnosis.10–12 Treatment planning should be cautiously done based upon patients clinical features, physical examination, CT findings, extension of the lesion clinically, and radiographically and comorbid condition. Angiography confirmed the diagnosis further to which treatment plan was made that involved ligation of the vessels and resection of involved region of mandible, which further achieved good results in the case. The patient had no signs of recurrence in 8 months of follow-up after surgery.

13. International Society for the Study of Vascular Anomalies.