Mycoplasma is the smallest free-living organism in nature. It is an important and common cause of respiratory infections. It mainly affects children aged more than 5 years and younger adults, causing a varied severity of illness from asymptomatic or upper respiratory infection to severe pneumonias. Hemolytic anemia is known as a rare but severe complication of Mycoplasama infection. In this study, we report on a a 15-year-old male with cold-agglutinin-antibody-associated fatal autoimmune hemolytic anemia secondary to Mycoplasma pneumoniae.

Mycoplasma is the smallest free-living organism in nature. It is an important and common cause of respiratory infections. It mainly affects children aged more than 5 years and younger adults, causing a varied severity of illness from asymptomatic or upper respiratory infection to severe pneumonias. About 25% of Mycoplasma infections are associated with an extrapulmonary complication at variable times. These may occur even in the absence of pulmonary symptoms. Any system of body may have disease manifestations. The common are central nervous system (CNS), cardiac, dermatologic, gastrointestinal, musculoskeletal, and hematological. Hemolytic anemia is known as a rare but severe complication of Mycoplasma infection. Occasional case reports of severe hemolytic anemia are available in the literature;1–4 we could not find any Indian case report of Mycoplasma pneumoniae causing fatal severe hemolytic anemia. In this study, we report on a 15-year-old male with cold-agglutinin-antibody-associated fatal autoimmune hemolytic anemia secondary to Mycoplasma pneumoniae.

A 15-year-old male was admitted to our hospital for pyrexia of high grade, cough with expectoration, and breathlessness since fifteen days. The patient was asymptomatic couple of weeks before he had cough along with fever and rapidly progressing breathlessness. There was no significant past history of similar illness. The family history did not show any relevance to the present illness. The patient was put on Coamoxyclav with artesuanate by a local practitioner without any relief. On general physical examination, the patient was conscious, oriented to time, place, and person. His blood pressure was 100/60 mm Hg, pulse rate 140 minute, and respiratory rate 24 per minute with the use of accessory muscles of respiration. Oxygen saturation was 90% on room air. The patient was febrile and pallor. There was no cynosis, lymphadenopathy clubbing, and pedaledema. A respiratory system examination revealed bronchial breathing with crepts in the right infrascapular area. Examination of other systems was unremarkable.

On admission, a chest X-ray showed a right mid and lower zone opacity (Fig. 1); an arterial blood gas analysis indicated type-one respiratory failure. A hematological investigation showed a hemoglobin content of 2.3 g/dL with a mean corpuscular volume of 91 mm3. The reticulocyte count was 12% with an LDH of 1,000 and the total leukocyte count was 64,315/mm with 68% polymorphs. The platelet count was 8 lac/mm3. Peripheral blood film had band form, metamylecyte, and occassional nucleated red blood cells. Blood sugar, urea, creatine, electrolyte, and routine urine microscopic examination were within the normal limits. The liver function was abnormal with the level of total bilirubin being 3 mg/dL, in which 1.7 was of indirect, SGOT was 87 U/L, and SGPT was within the normal limits. The amount of serum protein was 5.1 g with an albumin level of 2.7. The prothrombin time was normal. The antigen test for malaria was negative. The serology for dengue and scrub typhus were negative. The blood culture was sterile. The sputum for acid fast bacilli, Gram’s stain, and pyogenic culture remained nonconclusive. Ultrasonography of the abdomen was normal. The direct Coomb test was positive. Glucose 6 phosphates, serum vitamin B12, and hemoglobin electrophoresis were within the normal limits. The pathologist gave us an important input that red blood cells were agglutinating at a colder temperature while deagglutinated at a warm temperature (37°C). The cold agglutinin antibody was positive. IgG and IgM for Mycoplasma were strongly positive, as their serum values were found to be 28.33 and 1.97 respectively by the EIA method. 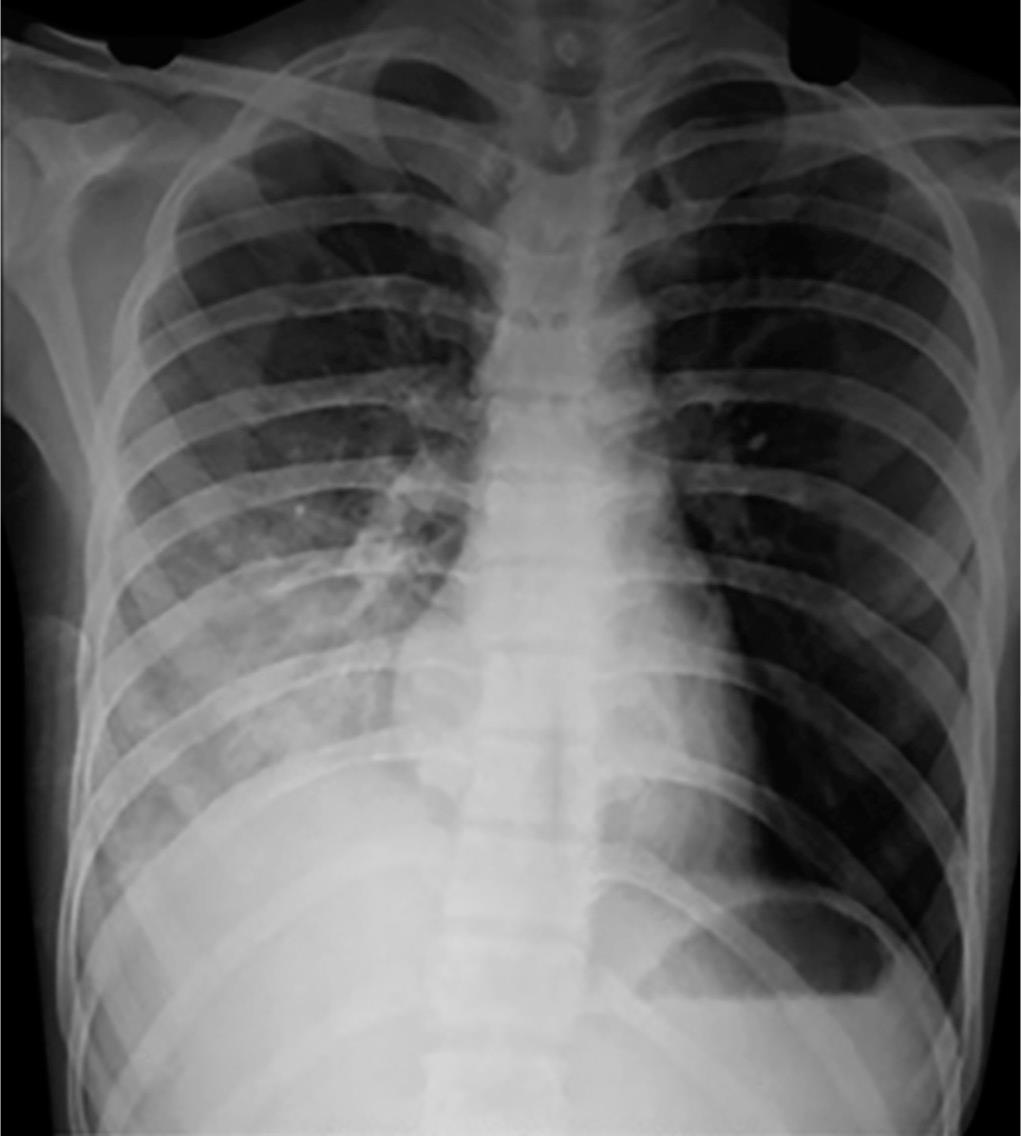 The patient was put on IV methylpredinesalone along azithromycin with supportive treatment using a warming device placed aside the patient to avoid cold. Blood transfusion was planned as the patient had a very severe hemolysis, but we were not able to execute it, as the blood group could not be identified owing to autoagglutination of red blood cells (Fig. 2). Considering a life-threatening emergency, we tried to infuse O negative blood as it is the universal donor, under the supervision of a hematologist, but we did not succeed because of hemolytic reactions during the tranfusion. Consolidation was begin to resolve (Fig. 2) but hemolytic reactions were persisting. The possibility of plamapheresis was also discussed but not executed because of a very low level of hemoglobin. So intravenous rituximab was administered at a dose of 375 mg/m body surface area. The patient continued to deteriorate, requiring mechanical ventilation and ultimately succumbing to death despite our best efforts. 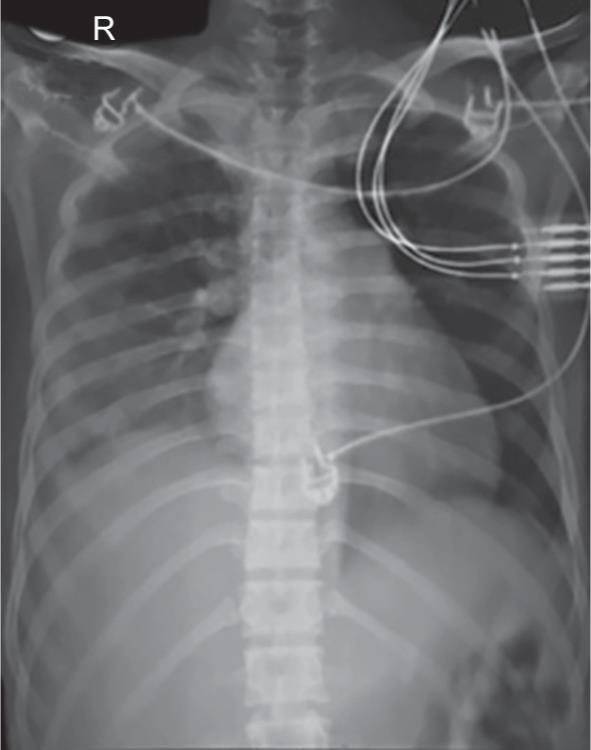 Autoimmune hemolytic anemias consist of warm and cold antibodies that are directed against the antigen on the red blood cells’ surface. These antibodies may be primary or secondary to any underlying cause, such as infections and malignancy. The cold agglutinin disease is rare, contributing to 15% of autoimmune hemolytic anemia with an incidence of 1 per million every year.5 Cold agglutinin titer is frequently observed during a Mycoplasma infection. About 50% of patients infected with Mycoplasmas have cold agglutinin.6 They often result in a mild subclinical hemolysis and remain unrecognized. Fatal and severe hemolysis is very rare and often associated with a significant lower respiratory tract involvement2 as our patient had (Fig. 3).

Although Mycoplasma-associated cold agglutinin antibody hemolytic anemia is known as an autoimmune disorder, its underlying mechanism is not fully understood. It may involve cross reactions with the cold agglutinin antibody; these antibodies are cross reactive. Autoantibodies develop against human red blood cell during course of Mycoplasma infection. In another hypothesis, they develop directly as a result of antigenic alteration of erythrocytes caused by Mycoplasma pneumoniae. Destruction of red blood cells is mediated primarily via a complement cascade, which occurs either directly or via immune adherence mediated by target-bound components. Both these process are common during winters.4

Clinical features are nonspecific like in our patient. Classical lavoratory features are similar to any form of hemolysis. Elevated lactate dehydrogenase and bilirubin levels with an increased reticulocyte count is common in cold agglutinin hemolytic anemias. Our patient had a hemoglobin level of 2.3 g only. Such severe hemolysis caused by Mycoplasma pneumoniae has not been reported across globe as per the available literature. Total leukocyte counts may raise a possibility of a hematological malignancy as it was in our case. It is similar to the case reported by Yusuf Khan and Yasin.4

A clue to diagnosis of such cases is the autoagglutination of red bloods cell on colder temperature, which disappear at a warm temperature, as seen in our case.

Mycoplasma culture is rarely used for a routine diagnosis because of many limitations such as the nature of organism, incubation period, expense, and specialized growth media. Therefore, diagnosis is usually confirmed by a serological test or polymerase chain reaction gene amplification technique. In our patient, the diagnosis was based on positive serology and Coomb test in the presence of cold agglutinin antibody similar to other cases reported.1–4 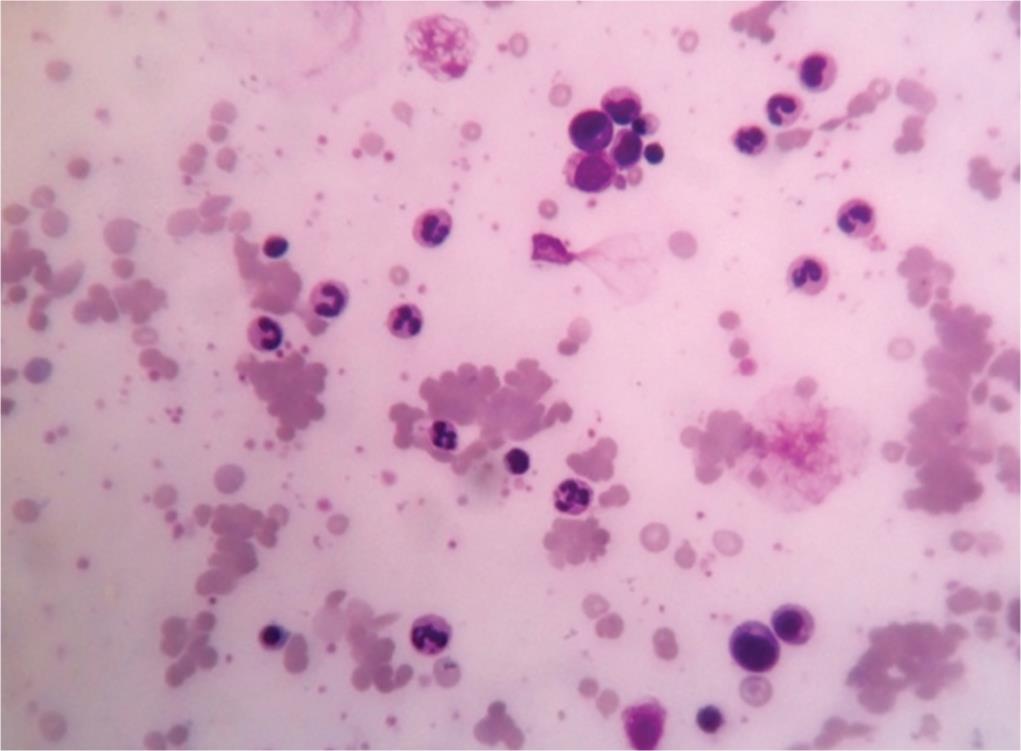 Mycoplasma-associated CAHA is usually self-limiting and most patient recover with the conservative treatment. Keeping the patient warm and treatment of underlying conditions are the mainstay of the treatment. Antibiotics are likely to be a limited value in Mycoplasma-associated hemolytic anemia, as it is considered immune-mediated. However, treatment of the underlying Mycoplasma infection fastened recovery in reported cases.2–5 Unfortunately, our patient continued to deteriorate despite radiological resolution of disease.

In autoimmune hemolytic anemias, blood transfusion can aggravate hemolysis; so this should be used sparingly. If blood transfusion is needed as a life-saving measure in case of a severe hemolysis or cardio respiratory compromise, the risk of transfusion-related hemolysis may be reduced by keeping warm the blood and the patient. The blood was successfully transfused in previously reported cases.2,4 We were not successful in transfusion in our case because the patient showed the most severe hemolytic reactions among the reported cases.

The most appropriate pharmacotherapy for CAHA has remained the area of clinical research. A favorable response to steroid is present in few case reports1,2 in study by Swiecicki et al.; around 40% patients responded to a steroid-containing regimen.5 Our patient did not respond to steroids.

Rituximab used as monotherapy or as combination therapy with a purine analog or azithioprine was analyzed by swiecicki et al., and the response rate was 83% in single agent therapy and 79% in combination therapy. The dose of rituximab is 375 mg/m2 weekly for four weeks.5 Our patient did not give enough time to rituximab response as he rapidly succumbed to the disease.

Our case demonstrates that severe hemolysis caused by Mycoplasma pneumoniae can be fatal even in the absence of other systems’ involvement. This manuscript not only make readers aware of rare complications of Mycoplasma but also provide an insight into its management.