Assessment of the Relationship between Adenoid Tissue and Mandibular Prognathism: A Cephalometric Study

Objective: The purpose of this study was to test the hypothesis that mandibular prognathism is associated with enlarged adenoids.

Results and conclusion: Results showed no statistically significant difference in the adenoid tissue dimensions among the three groups. Thus, patients with a prognathic mandible do not show enlarged adenoids.

The adenoid, also known as a pharyngeal tonsil or nasopharyngeal tonsil, is a mass of lymphatic tissue situated posterior to the nasal cavity, in the roof of the soft palate, forming an important part of the immune system.1 The development of the adenoid in normal subjects can be studied using lateral cephalogram.2 It is reported that the adenoid usually increases in size during childhood, and pathology is common between 2 years and 12 years of age. During adolescence, the adenoids decrease in size.3–5

Hypertrophic adenoids and tonsils, allergic rhinitis, irritants, infections, congenital nasal deformities predispose to obstruction of the upper respiratory tracts. According to the functional matrix hypothesis, obstruction of the airway can influence the development of the stomatognathic system or vice versa. Forward positioning of the mandible or large mandible can help overcome an obstacle such as enlarged adenoids.6 Therefore, the aim of our study was to test the hypothesis that mandibular prognathism is associated with enlarged adenoids.

Ninety-two subjects were selected from the total patients registered at the Department of Orthodontics and Dentofacial Orthopedics from November 2014 to June 2015. Jeans et al.7 showed that there are significant differences in the size of the nasopharynx according to gender. Thus, to avoid any gender bias on adenoid dimensions, all the subjects selected were Indian females and were 15–30 years of age. Informed consent was obtained from all patients for being included in the study.

Subjects with a history of previous orthodontic treatment, functional jaw orthopedic treatment, any surgery involving the jaws, or surgery for adenoids; breathing disorders (such as snoring and obstructive sleep apnea); cleft lip and palate; and any systemic disease affecting normal growth were excluded from the study.

On the basis of the degree of sagittal mandibular development in relation to the anterior cranial base, all female subjects were divided into three groups: mandibular retrognathism (n = 31; defined by angle SNB <76°), normal mandible (n = 31; 76° ≤ SNB ≤ 82°), and mandibular prognathism (n = 30; SNB >82°).

Lateral cephalograms were taken with the orbital-auricular plane parallel to the floor and the teeth in centric occlusion or centric relation at the end of the expiratory phase. All subjects received the same instructions for radiographic positioning and were told to place the tongue in a relaxed position and to breathe through their nose after swallowing.

To overcome the influence of the head posture on the pharyngeal airway space and to standardize the head posture, a simple inclinometer with the help of spirit levels was prepared.8 The first spirit level was attached to the left arm of a pair of eyeglasses, parallel to the sagittal plane out of the subject’s visual range without touching her temple plane to determine the changes in pitch. The second spirit level was placed perpendicular to the sagittal plane to measure changes in roll at the center of the eyeglasses. When the spirit level was adjusted parallel to the floor, the bubble would remain at the center (Fig. 1). The entire frame of the eyeglasses was made of plastic with no metal screws; therefore, it did not cast any shadow or artifact on the lateral cephalogram, which could interfere with the analysis (Fig. 2). After tracing the cephalograms on a lead acetate sheet, adenoid tissue dimensions were measured and compared. The reference points and lines in the cephalometric analysis selected have been shown in Figure 3. Table 1 shows the variables used in the analysis. 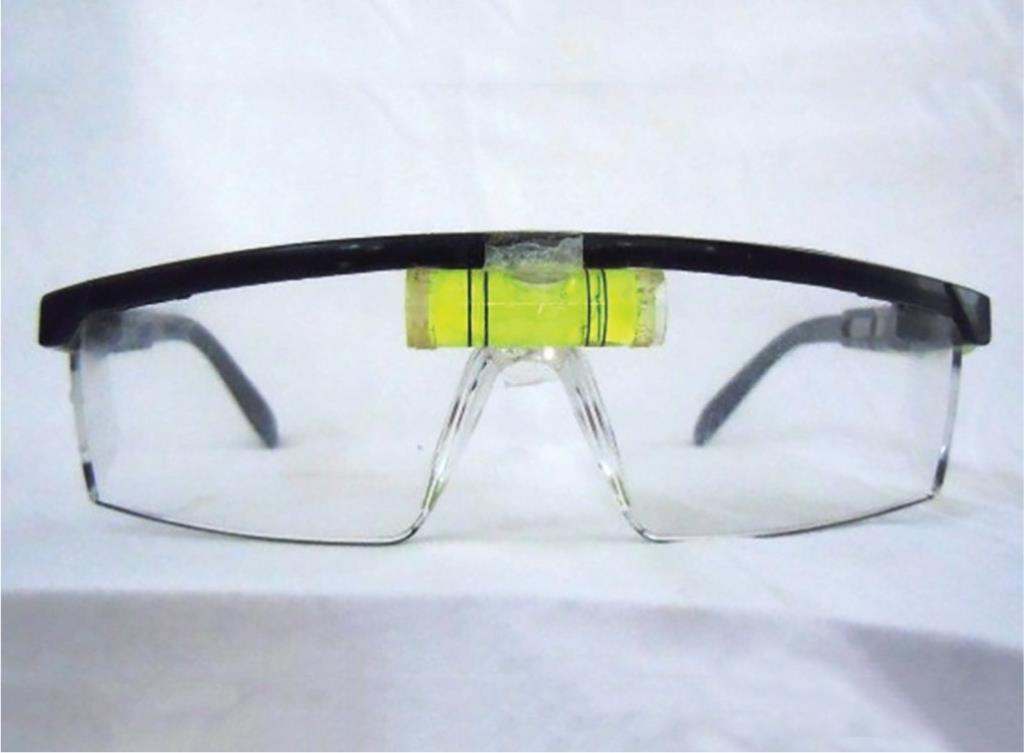 Fig. 1: An inclinometer prepared with a spirit level and plastic eyeglass 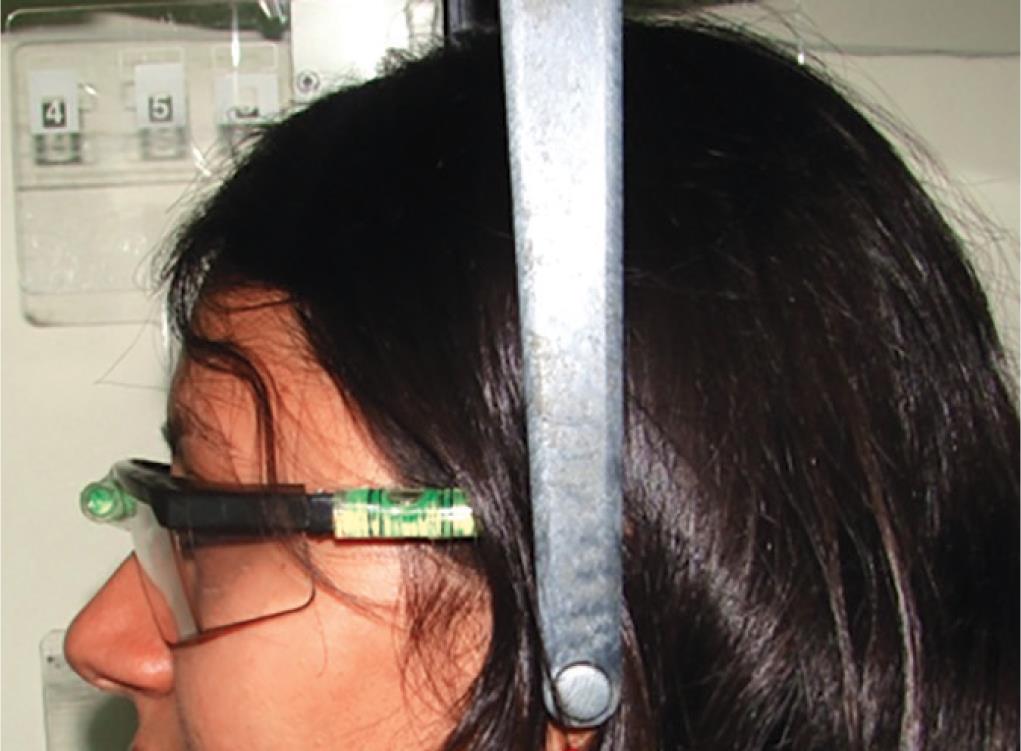 Fig. 2: A patient positioned in an cephalostat with inclinometer 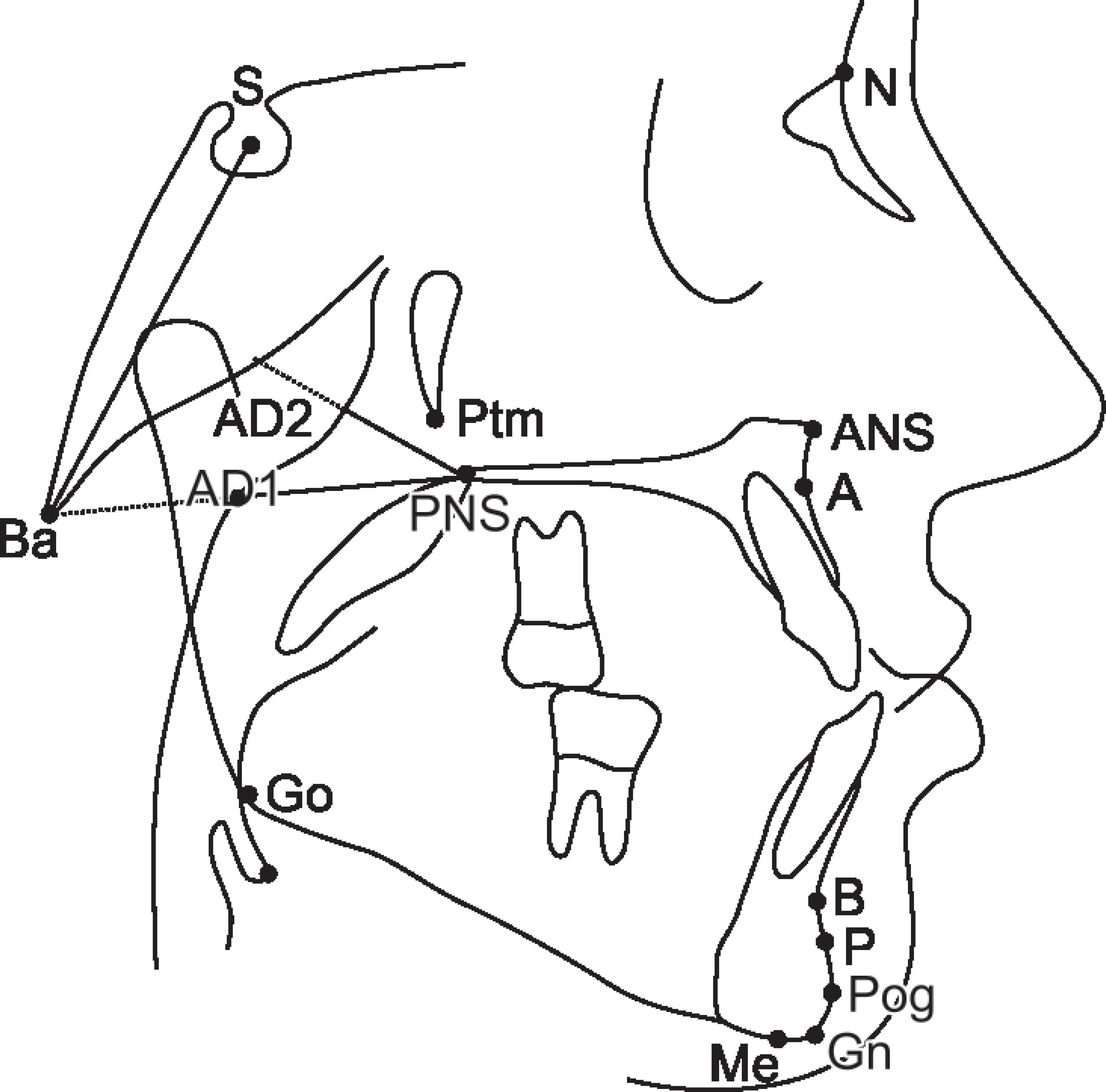 Fig. 3: Various variables and measurements made on cephalogram tracing

SPSS software package (SPSS for Windows Xp, version 13.0, SPSS Inc, Chicago) was used to perform all statistical analyses. Descriptive data included arithmetic mean and standard deviation, and range values were calculated for each variable as well as for each group and were used for analysis. A p value of %3C;0.05 was set to be statistically significant. ANOVA followed by post hoc Tukey’s test was used to compare difference among the groups for all the variables under study. Pearson correlation coefficient was used to assess correlation between different variables.

All cephalometric tracings were done by a single investigator. Tracings for 10% of the study subjects were repeated at random by the same investigator after one week for the assessment of intra-examiner reliability. Intraexaminer reliability was calculated using intra class correlation coefficient. The values ranged from 0.94 to 0.98, showing acceptable agreement between the tracings.

The growth of adenoidal tissue reaches the maximum around 6 years of age, during which it starts to involute as well. Facial growth is affected by adenoidal growth. Abnormal growth of adenoids can compromise the nasopharynx and may also lead to congestion, abnormal breathing, or apnea. The term “adenoid facies” has been used to characterize the typical appearance in patients with obstructed airways.9,10 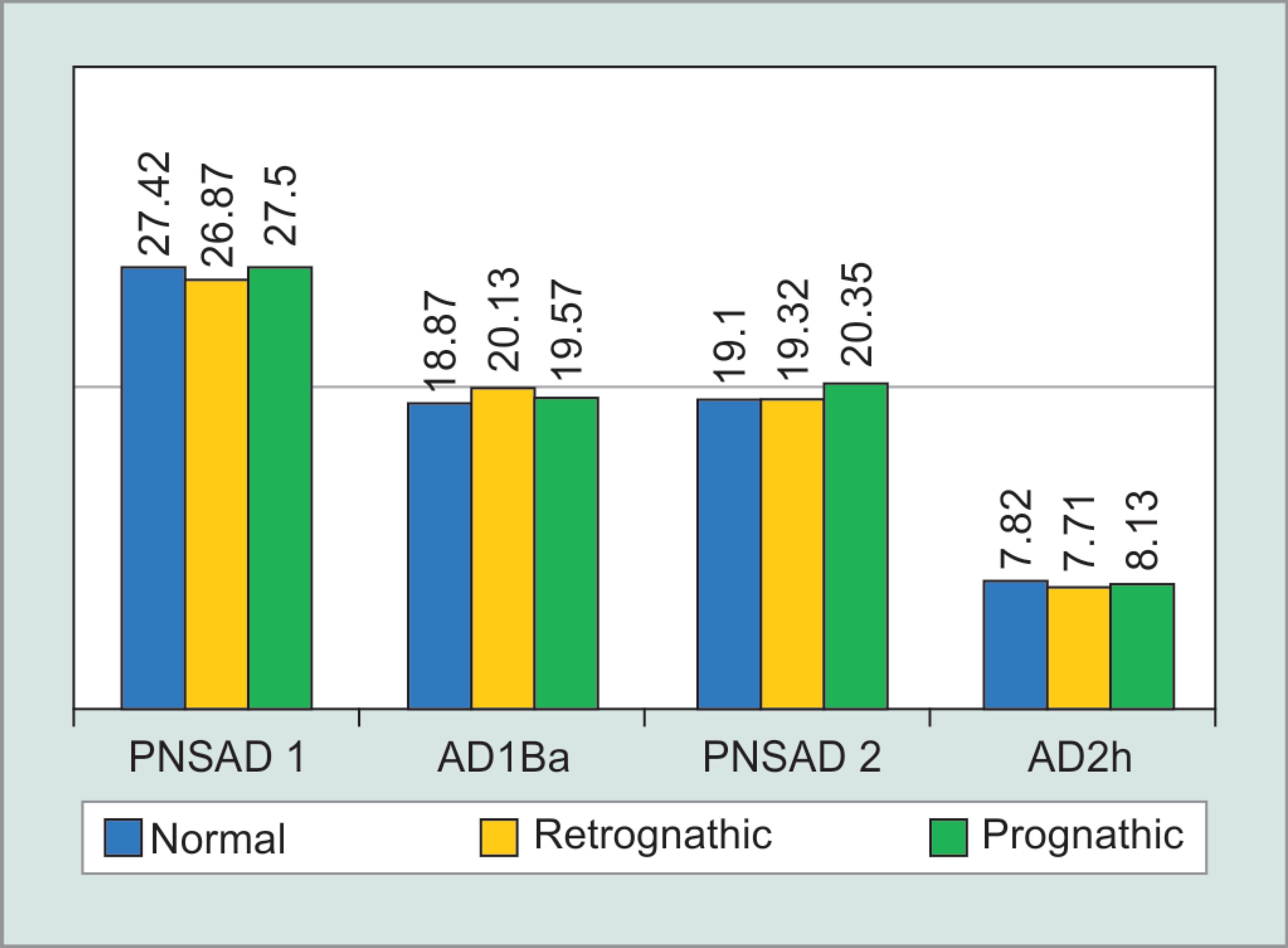 Tonsillar hypertrophy reaches a peak at 5–6 years of age in children.16 Tongue base becomes more anteriorly positioned with tonsillar hypertrophy, as shown by Kawashima et al.17 In spite of the reduction in the lateral dimension by enlarged palatine tonsils, a normal airway could be maintained in this manner. Any change of neuromuscular activity, such as that of positioning the tongue anteriorly, might also displace the mandible anteriorly. Literature18 shows two causes of prognathism (a long mandible or a mandible positioned forward). Some authors6 have suggested the theory of forward positioning of the mandible compensating for the presence of an obstacle such as enlarged adenoids. A previous study by Rubin19 noted the influence of adenoid hypertrophy on tongue position. It was observed that mouth breather patients had more forward and downward positioning of tongue with a downward position of the mandible.

In our study, there was no statistically significant difference in the adenoid thickness (AD1-Ba, AD2-H) among the three groups. Thus the hypothesis that patients with a prognathic mandible have enlarged adenoids was rejected.

A strong inverse relationship was noted between the airway thickness and adenoid thickness. Thus, it is shown that pathologic enlargement of adenoids can cause airway obstruction and cause sleep apnea, irrespective of the mandible form. Adenoidectomy, powered shaver adenoidectomy, septal surgery, maxillary expansion, cryosurgery, bipolar radio-frequency ablation, inferior turbinectomy, and use of nasal sprays are some of the treatment modalities associated with nasal obstruction.19

These results were based on a lateral cephalogram that provides details in 2 planes of space, but future research can focus on three-dimensional measurements for better definitive results.

Our study showed no statistically significant difference in the adenoid tissue dimensions between the three groups (prognathic, retrognathic, and normal mandible) of patients. Thus, the hypothesis that mandibular prognathism is associated with enlarged adenoids is rejected. Therefore, adenoid tissue thickness is not related to sagittal mandibular development.

I extend my sincere thanks to Dr Ashima Valiathan and Dr Arun Urala for their guidance.

2. Linder-Aronson S. Adenoids: their effect on mode of breathing and nasal airflow and their relationship to characteristics of the facial skeleton and the dentition. Acta Otolaryngol 1970;265(Suppl):1–132.

4. Linder-Aronson S, Woodside D. The growth in the sagittal depth of the bony nasopharynx in relation to some other facial variables. In: ed. JA Jr. McNamara ed. Naso-respiratory function and craniofacial growth, Monograph No 9. Craniofacial growth series. Ann Arbor: Center for Human Growth and Development; The University of Michigan; 1979. p. 27–40.