Foramen Magnum: A Morphological and Morphometric Study in Dried Human Skull Bones of Rajasthan Population and its Surgical Importance

Introduction: The foramen magnum (FM) is a large opening in the base of the skull. The dimensions of FM are clinically important because many vital structure passing through it, viz., the lower end of medulla oblongata, the vertebral arteries, and spinal accessory nerves. It may endure compression such as in cases of FM herniation, FM meningiomas, and FM achondroplasia. The knowledge of FM diameter is needed to determine some malformations such as the Arnold–Chiari syndrome, which shows expansion of the transverse diameter.

Materials and methods: The present study was carried out on 75 dry human skulls of unknown age and sex belonging to Rajasthan population by the Department of Anatomy at Mahatma Gandhi Medical College and Hospital, Jaipur, Rajasthan. All the measurements were taken with the help of digital vernier calipers.

Conclusion: This study will be useful for the anatomists, radiologists, neurosurgeons, and orthopedic surgeons.

The foramen magnum (FM) is a large opening (Latin: great hole) in the base of the skull (Fig. 1). It is an important landmark of the base of skull and is of particular interest for anthropologists, anatomists, forensic medicine, neurosurgeons, and radiologists.

The FM is surrounded by different parts of the occipital bone that has two condylar parts, the squamous part and the occipital part.

The squamous part lies behind and above, basilar part in front, and a condylar part on either side.1

Many authors have classified FM based on its shape, viz., oval, egg-shaped, round, tetragonal, pentagonal, hexagonal, and irregular.4–6

The FM is a wide communication between the posterior cranial fossa and the vertebral canal.

The alar ligament of dens divides the foramen into anterior “Osseo-ligamentous compartment” and posterior “Neurovascular compartment.”

Both upper fasciculus of the cruciate ligament and membranatectoria are attached to the upper surface of basioccipital bone in front of the FM. 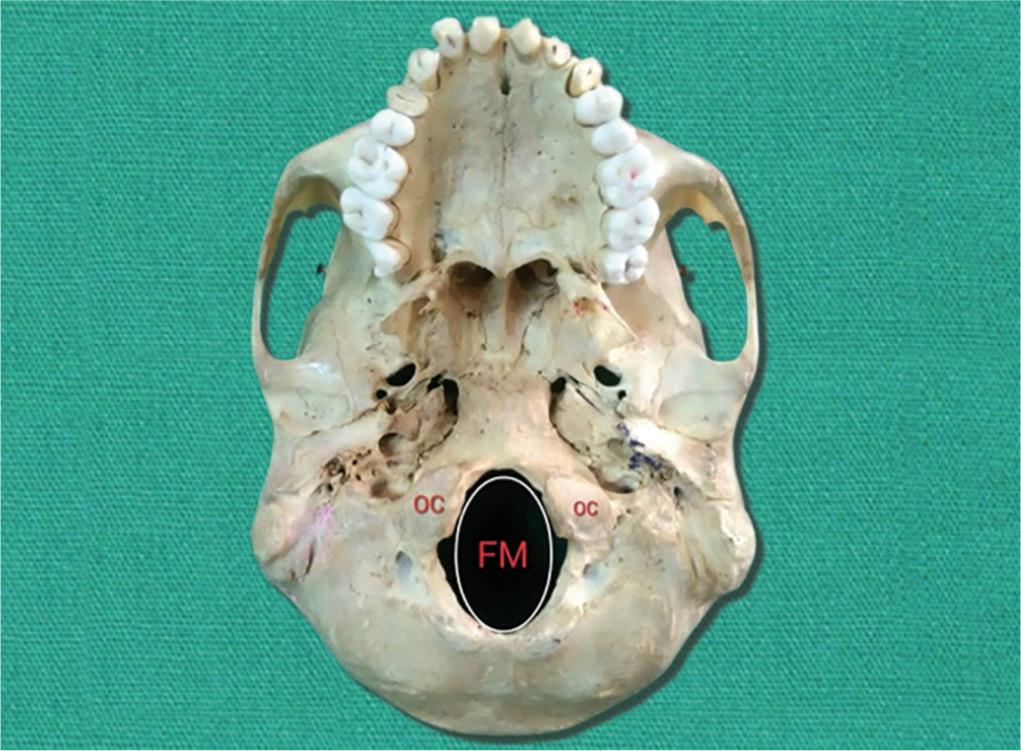 Its wide posterior part contains the medulla oblongata and its meninges. In the subarachnoid space, spinal rami of the accessory nerve and vertebral arteries with their sympathetic plexus ascend into the cranium.

The posterior spinal arteries descend posterolateral to the brain stem, whereas the anterior spinal artery descends anteromedian to the brain stem. The cerebellar tonsils may project into the FM.7 The dimensions of the FM are clinically important because the abovementioned vital structures passing through it may endure compression such as in cases of FM herniation, FM meningiomas, and FM achondroplasia.

The transverse diameter of FM will be increased in the Arnold–Chiari syndrome.8–10

The evaluation of morphometric of FM is helpful for forensic dentistry and medicine.11

The progress in the neuroimaging techniques to diagnose craniovertebral abnormalities accurately has enhanced the field of craniovertebral surgery. Such surgeries are a challenging task for the neurosurgeons because of the close relation of vascular and neural structures within the FM. Advances in skull base surgeries such as the “far lateral transcondylar approach” have improved the better and wider access of surgical exposure leading to successful surgeries in this region. To perform such surgeries, prior analysis of the morphometric dimensions of FM is essential.12

The present study aims at collecting morphological and morphometric data on FM, which might help neurosurgeons to plan surgeries and add to the preexisting literature on FM. 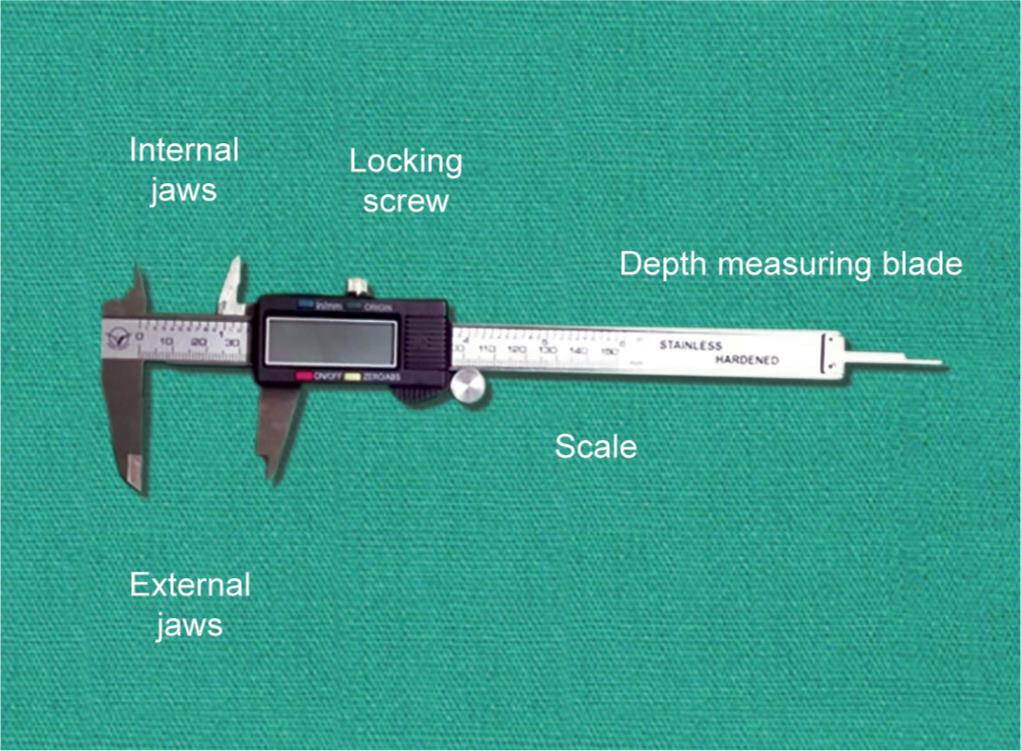 All the measurements were taken with the help of digital vernier calipers (Fig. 2).

Hence, area will be calculated as follows:

The morphological and morphometric observations of the FM in 75 dried human skulls belonging to Rajasthan population are as follows (Table 1):

The mean values of APD and TD are represented in the form of bar diagrams (Fig. 7).

Around 45.33% of skulls studied exhibited an ovoid FM. 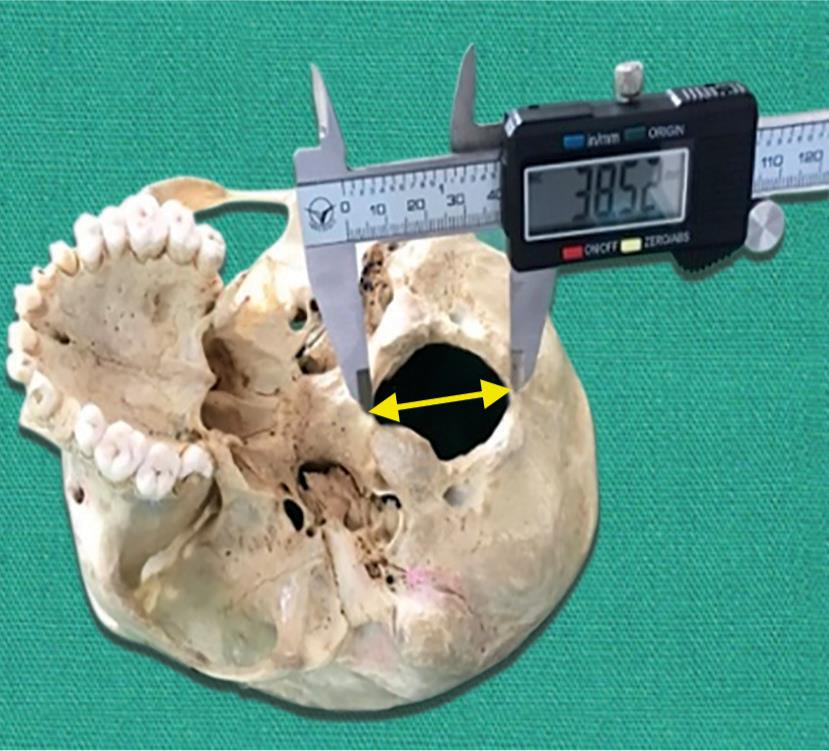 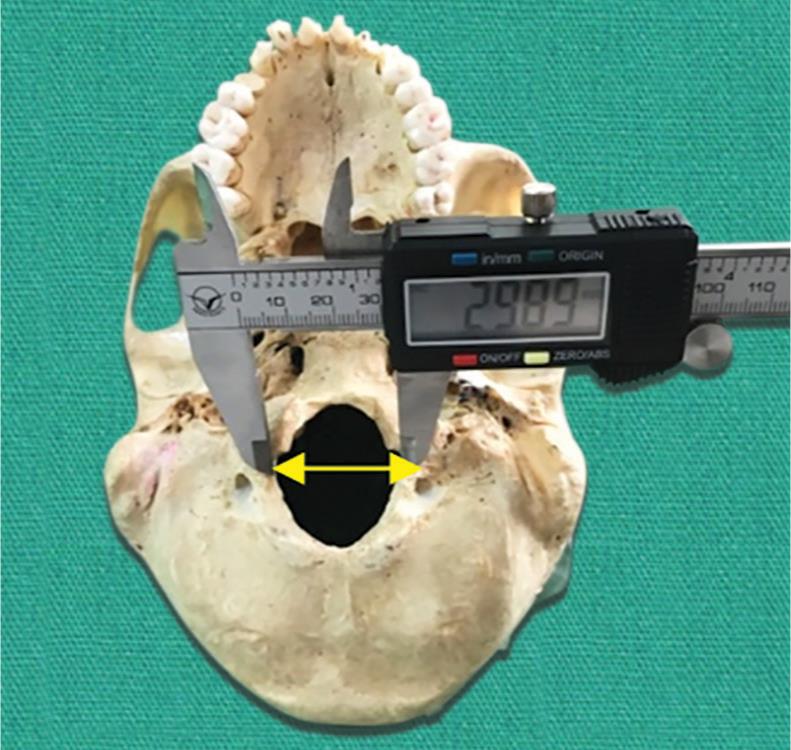 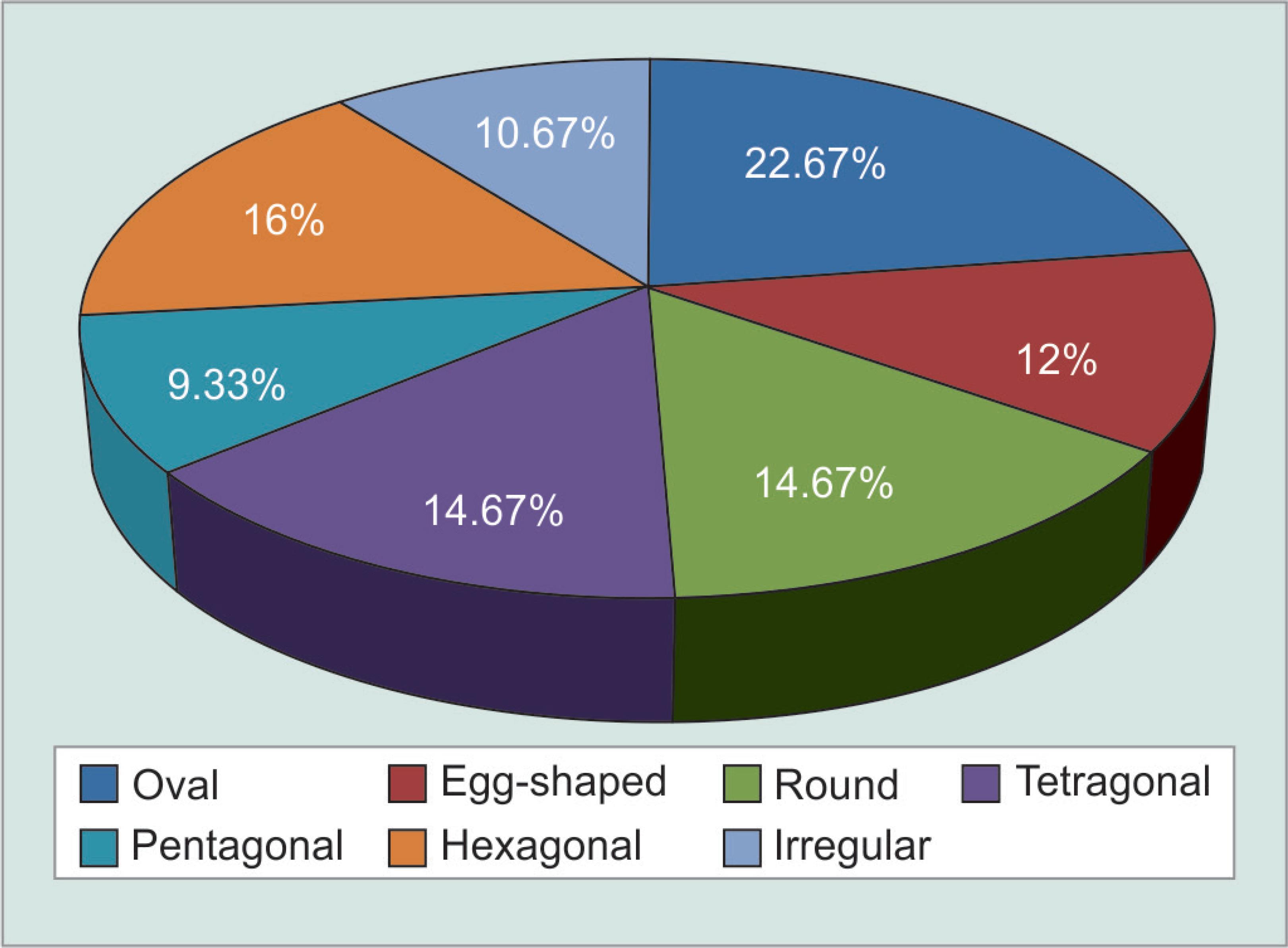 Fig. 6: Percentage of various shapes of the foramen magnum 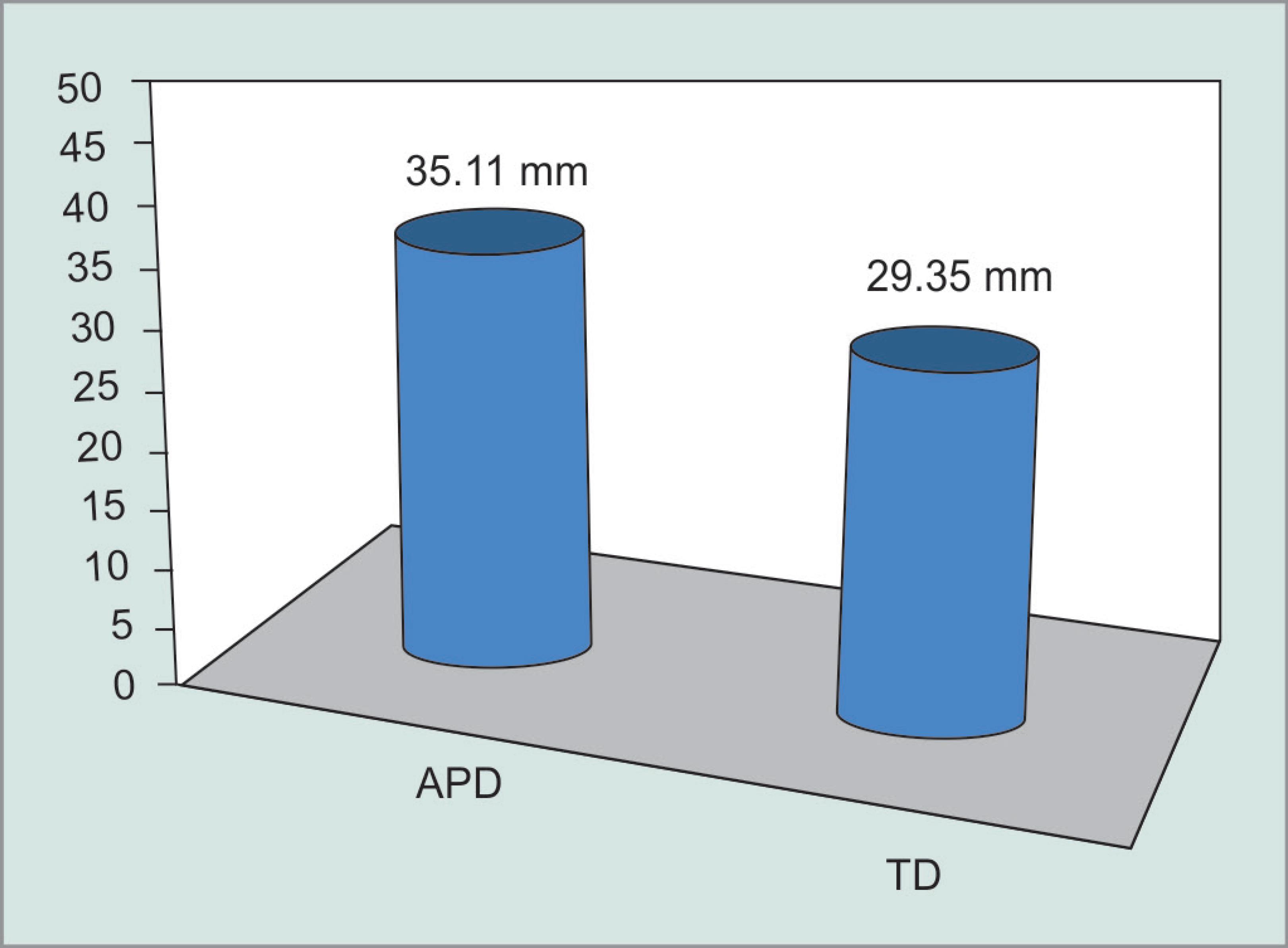 In the present study, oval-shaped FM was the commonest shape, which is comparable to findings of researchers of ethnic groups, Kumar et al., Piras et al., and PelinIlhan et al. (Table 6).

In the present study, the oval-shape was observed in 22.67% of dry skull specimens in contrast to highest 64% reported by Zaidi et al. and lowest 6% reported by Veeramani et al. (Tables 7 and 8).

In the present study in Rajasthan population, FMI was also 1.2.

In another study by Rajkumar et al., the Udaipur region of Rajasthan has reported much lower area of FM (754.32 mm2).

The morphological and morphometric analysis of FM and its variations is important not only to anatomists but also to the neurosurgeons, anesthetists, orthopedicians, and radiologists. These variations have become significant because of newer imaging techniques such as computed tomography and magnetic resonance imaging in the field of diagnostic medicine.

This study will also be a help to forensic medicine experts since ethnic variations as seen and compared with research of other ethnic region population researchers may help in identification of different races.